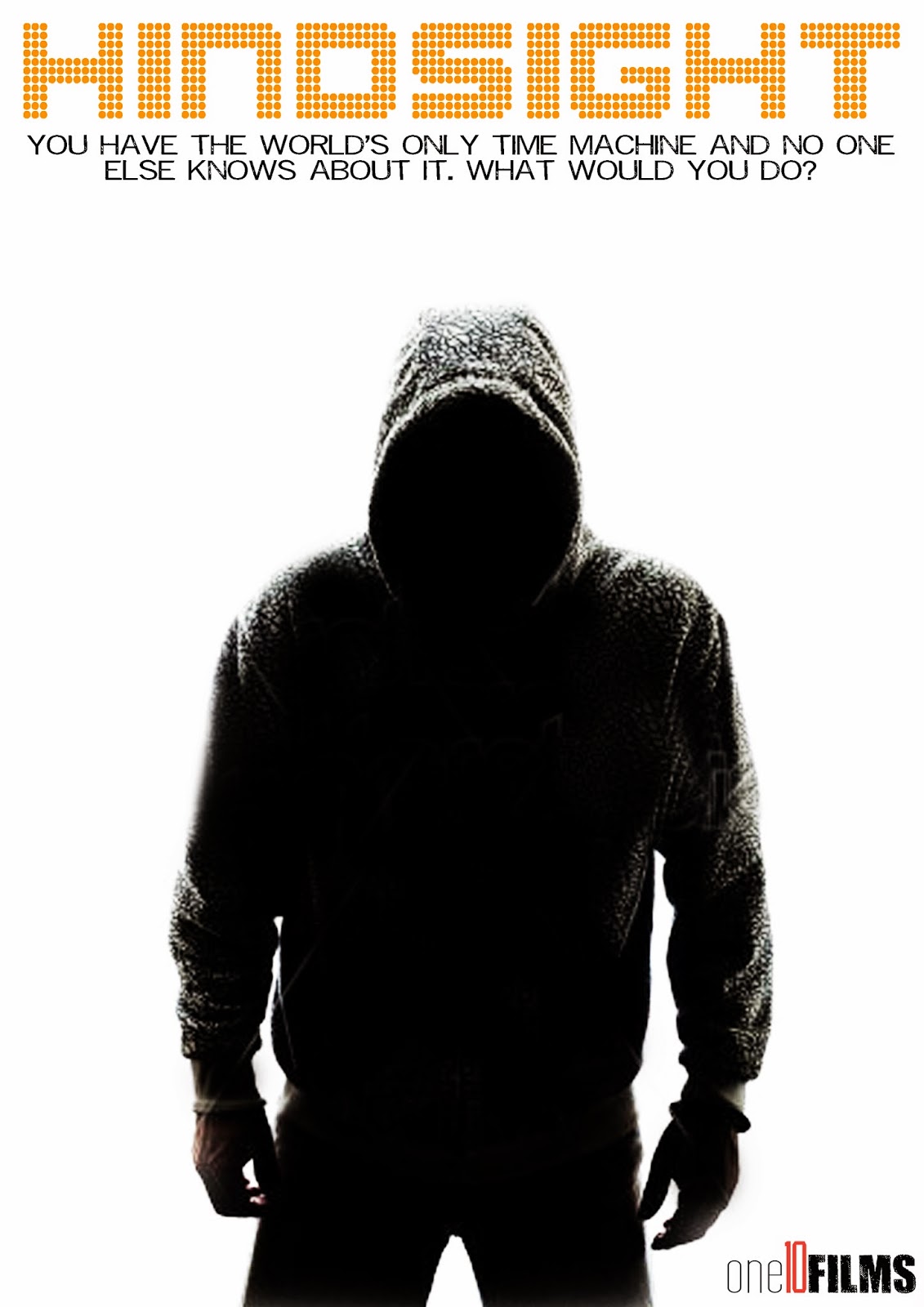 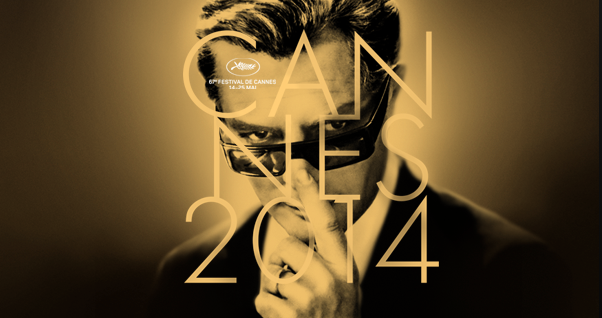 Cannes is nearly upon us... the yearly gathering of producers, directors, financiers and anyone else who's part of the movie industry. It's a fortnight of meetings, networking, parties and premieres... and quite a lot of bullshit too. It's always good to remember - just because you're there doing genuine business - it doesn't mean everyone else is. Cannes is the place to go to find people to work with on future projects or maybe to find distribution or sales for your current project, but it's also full of people trying to blag something for nothing. Some go purely for the parties... fine...no harm in that... but others will tell you what you want to hear in order to appear to be people worth talking to. My advice is simple: Real people leave a trail of evidence of their work... use the internet on your phone to check people out before you waste valuable networking time talking to a wannabe. I've had first time filmmakers in Cannes with no track record ask me if i could help them find £100m for the their first feature. A) What? £100m???  B)No.

Even if you don't have a reason to go to Cannes this year, it's worth checking it out as there's nothing that brings home how the industry works better than a trip to Cannes.  Walking around the Marche' Du Film is a revelation - it was for me when i first went back in 2010. The sheer amount of films looking for distribution... it's staggering... and all the posters. It really makes you realise that artwork is vital... and your classy artwork you've designed for your indiefilm is probably unoriginal and totally wrong to sell your film.  It's also amazing to talk to buyers and sales agents face to face. Their take on the industry is very different to that of a filmmaker. It's time well spent if you can find out what they are looking for... you'll be very surprised.

It's very humbling walking around Cannes with your latest film in your bag ready to pitch, when you are surrounded by hundreds of other filmmakers doing exactly the same thing..  you begin to realise that you need to stand out... you need an angle and it's all about who you know..  None of it helps if you don't have a killer movie, but you need connections.

I've been lucky to make some great connections in Cannes, many of whom i'll be meeting again this year - people who really help push things forward.... but i'm always looking for new connections and that starts now, weeks before we even leave. I suggest you do the same.

Tips for where to go? Ok...  obviously, the Marche Du Film and the Pavilions during the day. Talk to people... don't be scared to approach people and ask what they are in Cannes for - strike up conversation.  In the evenings, Le Petit Majestic is a riot... a little street bar behind the main Croisette... this place is the best street bar during festival time. Expect to find lots of interesting people here... often the real people behind the bigger companies come here. The lawn of The Grand is the place to be for networking with the movers and shakers - they'll be players too - but this is a great place to meet up with other producers and filmmakers - not to mention some big industry names sometimes.

Other than that, there's the parties.... the parties are often where the main action is. But how to get an invite? That's what connections are for. Ask around in the Pavilions during the day...  look online... there's always a way.

My final tip is this: It's very easy to enjoy Cannes... it's warm, it's beautiful, it's fun... but don't forget why you are there. Make every day count. Meet people. Sell your film. Pitch your project. Do what you came to do.

S
Posted by Sean J Vincent at 2:18 PM No comments: 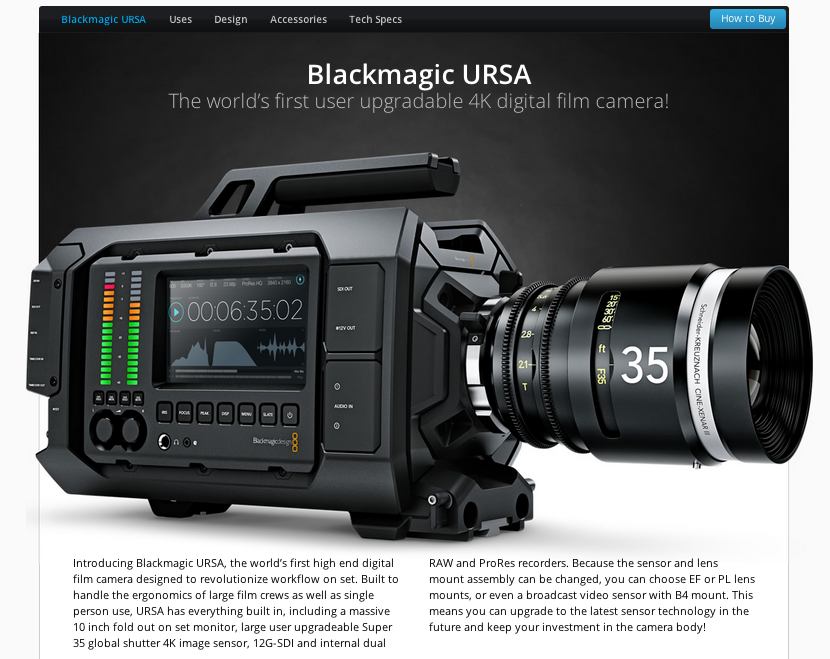 Anyone who's been keeping an eye on new camera releases at NAB can't have failed to notice these two beasts... the Blackmagic URSA and the AJA CION. Both made quite a splash. To be fair, the Blackmagic has probably made the biggest impact, for several reasons...

As you know, these are both 4k cameras. The CION look like a sensible and solid piece of kit, but next to the Blackmagic, it looks a little a) Basic and b) Expensive. A crazy thing to say about a sub $10k 4K cinema camera.... but that's where we're at these days.

So which 4K cameras will i use? I will admit that the feature set of the Blackmagic is very tempting... if they've done a good job with the build quality and the firmware and it doesn't suffer any of the weirdness of the 4K Production camera, then it might be a good bet... but, there's still something that bothers me. The lovely people over at Atomos have announced the Shogun 4K recorder. This looks stunning and i'm already a big fan of their products and workflow - i trust them. But, teaming a Shogun with a Blackmagic will be a big old rig... probably too big. (The camera weighs 16lbs) What i really need is a nice, compact 4K sensor to use with a Shogun. There's the GH4 of course...which i really like the look of, but i'm not sure it's an 'A' camera for a feature...  i'll have to wait until i can test one.

It's funny... i remember trying to choose between the FS100, the 5Dmk2 and AF101 a few years ago... i chose the FS100 and it's still going strong. With that way technology is advancing now, i'd doubt my next camera will work with me for as long...
Posted by Sean J Vincent at 2:56 AM No comments:

Atomos are wiping the floor with the competition today as they announce two new products...

Second, the Ninja Star - An HD ProRes Recorder that is tiny and weighs just 3.5oz 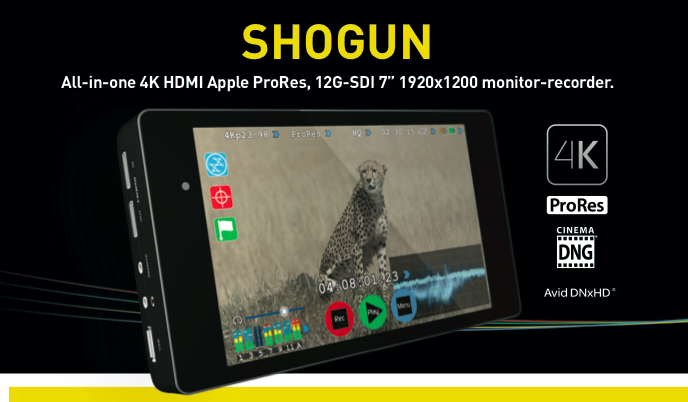 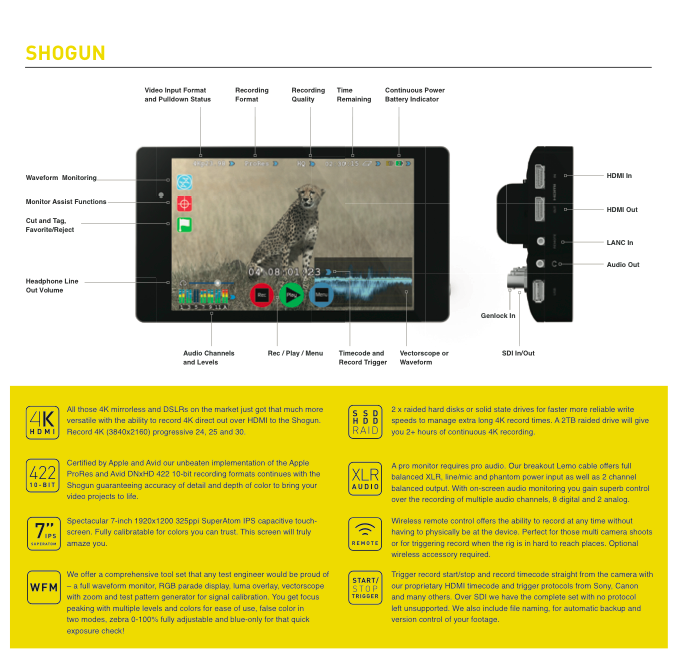 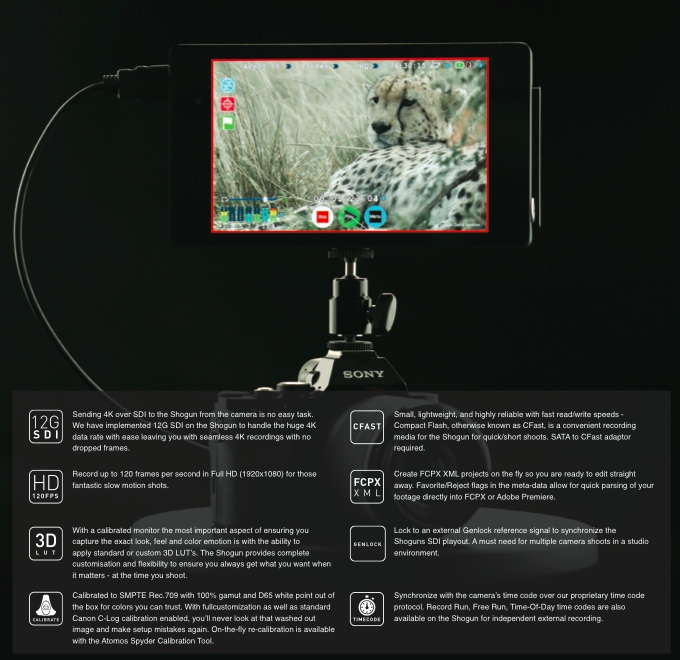 It looks like we can load LUTS into the Shogun.... that's going to be really useful. "With a calibrated monitor the most important aspect of ensuring you capture the exact look, feel and color emotion is with the ability to apply standard or custom 3D LUT’s. The Shogun provides complete customisation and flexibility to ensure you always get what you want when it matters - at the time you shoot."

This has to be a killer product..  especially when you pair it with either the new Sony A7S or the Lumix GH4... but it's also a massive improvement over any 4K solution i've ever seen. I can see the Shogun taking it's place alongside any of the new crop of 4K cameras out there. It gives us what we want - ProResHQ at 4K and Cinema DNG.... the best of both worlds with no daft licenses to buy or hire like with the Odyssey 7Q.. not to mention the cheaper media, the better screen... the list goes on.

Nice one Atomos. Makes me very happy i'm already in the Atomos workflow...  the next feature will definitely be using the Shogun. 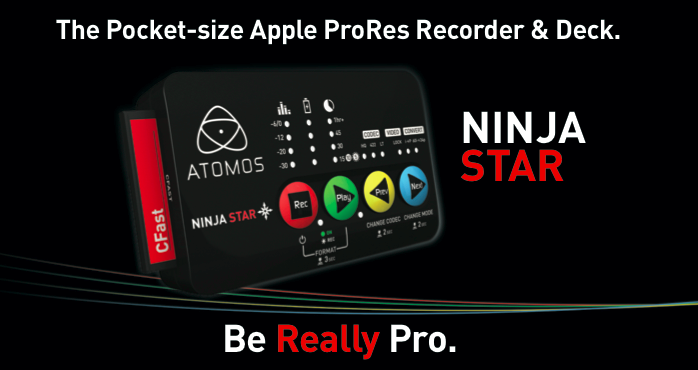 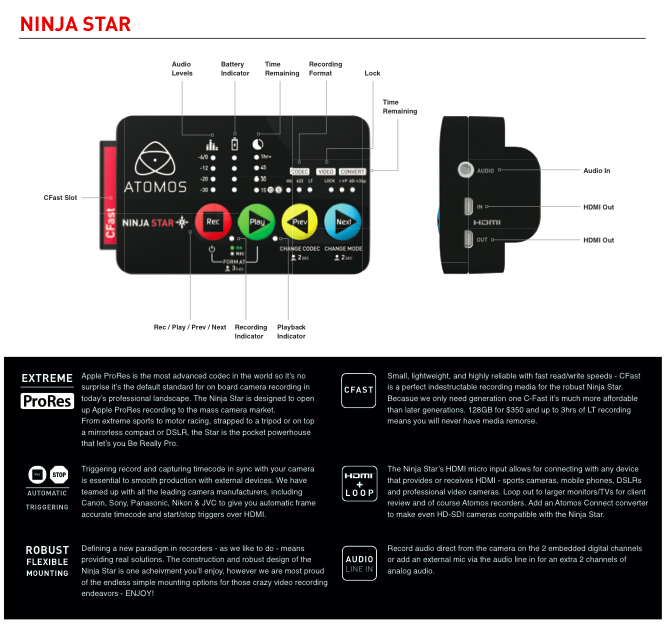 No one has addressed the growing market for drones as far as ProRes recorders go. Atomos have taken their Ninja and shrunk it to make it the perfect product for Drones and other action-cam type situations. You can mount these things on your head alongside a GoPro now... that's exiting. 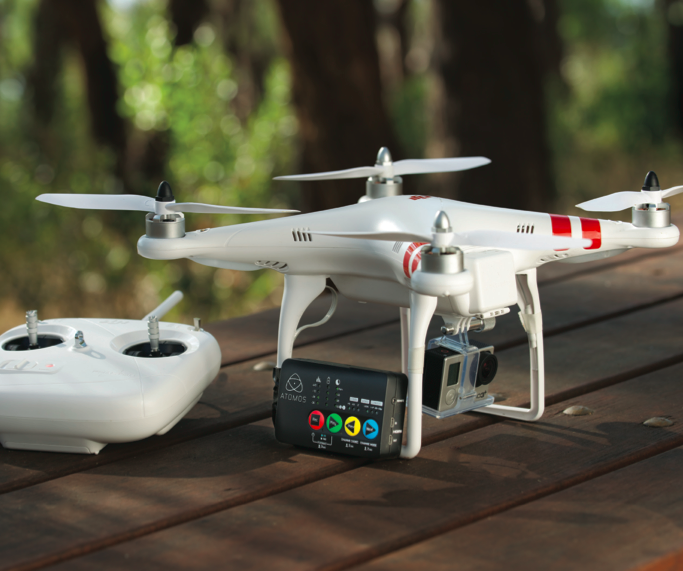 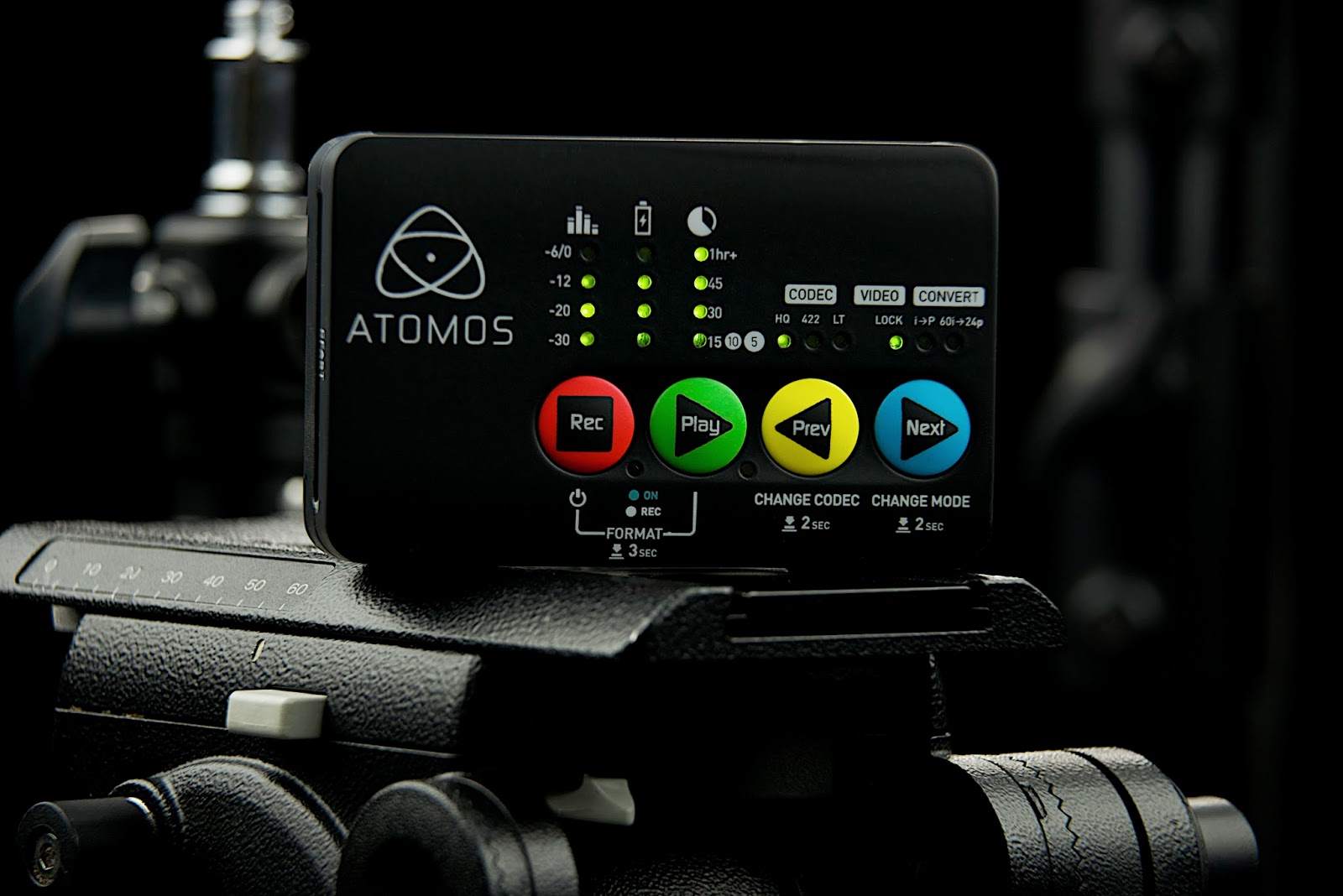 As this is already doing the rounds...come back later for more... 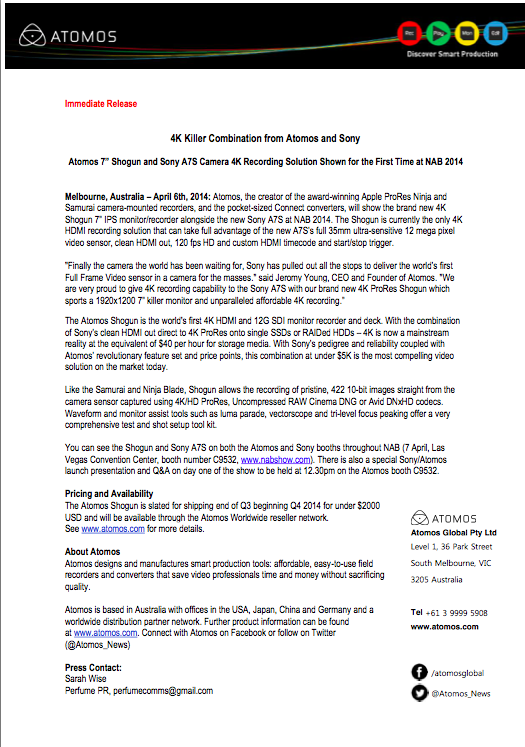 Posted by Sean J Vincent at 9:42 AM No comments: 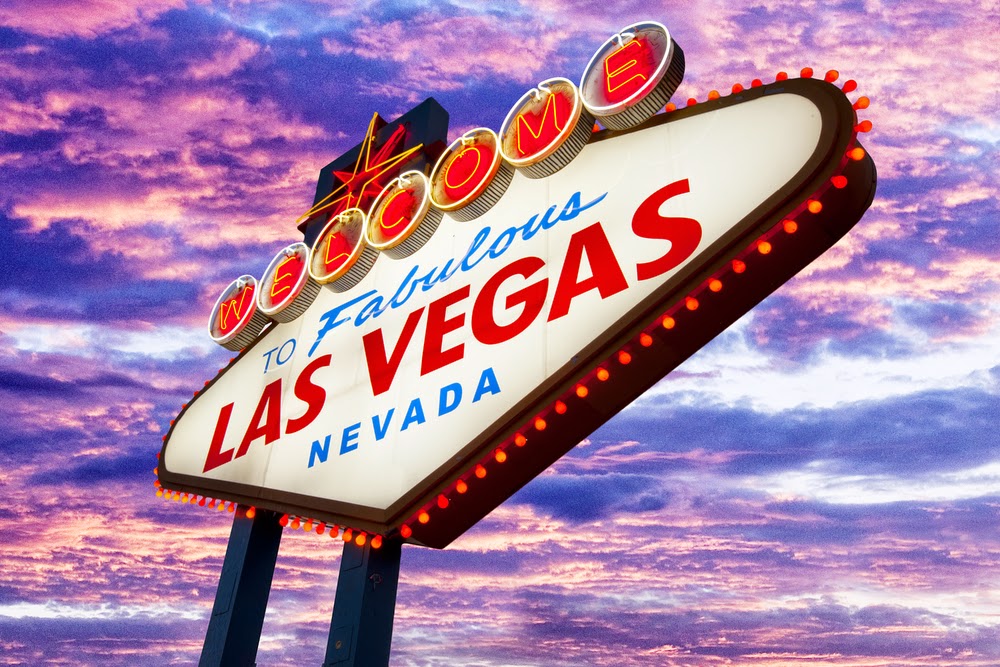 I may not be at NAB this year... but i've got some exclusive and very exciting news to break as soon as doors open at NAB...

There's some new stuff which is rumoured and hoped for... but nothing is confirmed - yet.

Posted by Sean J Vincent at 3:51 AM No comments:

So yesterday was a beautiful sunny day here in Hertfordshire, so i headed to a local park to do some test shooting with the new toys that GenusTech sent over.

Just so you know, i'll only endorse something that i actually use and think represents good value and high quality for filmmakers like myself. If it's crap, i'll say so.

Firstly, there's the PV MatteBox. This is so well made.... a huge improvement over my previous model. It has the option to clamp onto your lens using a variety of lens adapters or you can mount it on your rail system using an adjustable riser. It comes with 2 filter trays, one rotating and one fixed. There's also a french flag which attaches to the front lip. If you've never physically used a properly built MatteBox before, you'll be surprised how much more sturdy they are than the cheaper varieties often found on eBay. This thing does not wobble or creak or move in any way once it's locked into position. But, if you need to move it to change lenses, it's easy to do. A very high quality product.

From the same stable comes the Bravo Follow-Focus. When Mark from GenusTech said he might have a solution for me going through follow-focus units (they break on me...), i was keen to try it out. I often take quite a bit of weigh on the follow-focus as i focus as i am shooting hand-held, so one hand is always on the focus. This has broken my previous models. The Bravo is built like a tank. It's made from metal, not plastic and secure in place with a thumbwheel for the 'in and out' and a turn-type grip for the back and forth on the rails. There's no play at all and the control feels very solid. There are 2 'stops' you can set to achieve a perfect rack-focus effect and these are very easily moved and set in new positions or just kept out of the way if required. I've only used it for one day, but i can see this being part of my rig from now on. It's a step ahead of other models i have used.

The Mini-Jib (I reviewed in this month's Digital Film Maker magazine) is a very useful and innovation bit of gear. My previous jib weighed 12 times what the mini-jib weighs!!! That would be less surprising if this little jib couldn't lift the same weight... but it can. It comes in a cool little bag which you can easily carry on your shoulder and it rigs right on top of your usual tripod without removing the head...   Once it's rigged, it performs just like any other jib. It extends using telescopic arms and counterbalances using regular dumb-bell weights. I really like this jib. For those spur of the moment jib shots where you really don't want to spend half and hour rigging a full sized jib, this is perfect. It's also great for guerilla shoots as it's so quick and easy to rig up and down.

Lastly, there's the MoCo motion controller. This genius little device allows you to get beautiful, slow sweeping lift shots from the mini-jib without worrying about your clumsy self ruining the shot... let the MoCo do the work. I also used it on my slider/dolly and it brings a whole new lease of life to tracking shots. We shot all day on one set of AA batteries and they are still going strong. Excellent product.

We shot using a Sony FS100 with a GenusTech Cheeseplate and an Atomos Ninja Blade on recording duties. The gear shots were done with a GoPro Hero3 and a Canon 550D.

Massive thanks to Mark and Sandy at GenusTech.
Posted by Sean J Vincent at 5:26 PM No comments: