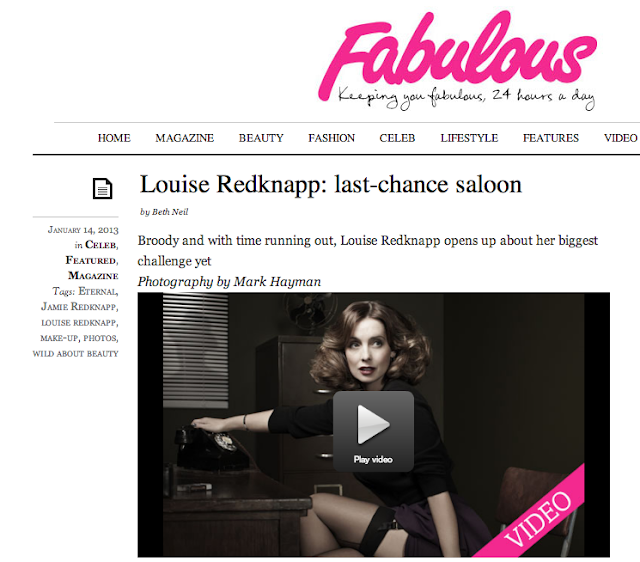 Back in early December, i shot a 'behind the scenes' film for a photoshoot that Louise Redknapp did for Fabulous magazine. It's now online and you can see it here:

I had a GlideTrack, tripod, Zoom H4N and a set of 3 RedHeads for the interview.

I basically had to work around the photoshoot. The Photographer and his assistants were very busy all day moving lights, blocking with screens and changing the set around and i had to try and not get in the way.... easier said than done sometimes. I shot a lot... probably over an hour of footage...  It's the first time i've just handed over footage for someone else to edit.. that was odd... but it looks pretty good.

Things i'd do differently next time? Well, this was for a client who supplied the gear, so on that front i couldn't change much... but if i could, i'd shoot with my FS100 and my set of lenses. The 5D Mk2 is still a good camera, but it's tricky to operate in situations where you don't have control over the shoot... when it was time to do the interview, i barely had enough time to set up the lights, let alone check audio levels on the H4N... if i had the FS100, i could hit record and that would be that.... and with regard to the lenses, the Canon L series are fantastic...i love them, but i missed the manual iris control i have on my manual lenses.

Anyway... i'm pleased with the end result and shoot taught me what it's like to work in a different kind of situation to what i'm used to.

Big thanks to Cherry Duck for putting it my way. 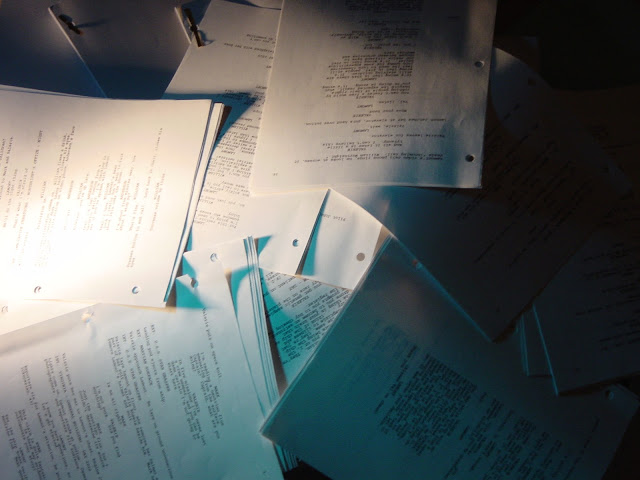 I've written quite a few screenplays... two of which i have made into feature films. It's always tricky deciding which story ideas have the best potential to be actually made into films. I tend to write all the time...so i've always got more ideas than i need.

Working on a much tighter budget than Hollywood, i have to write based on what i know i will be able to shoot. It's no good writing about huge World ending events if i can't realise them on screen. I have to work on characters more... write about subjects that i know about. I also have to write based on locations i know i can find. It's not easy, but it does make you a better writer. Not only that, but if you look at a lot of the shit coming out of Hollywood Studios, they've clearly forgotten about character development...some big movies barely sketch out the main character's traits and reasons for being where they are before the main story kicks off.  It makes the viewer not care what happens to them.

For my next feature, i have a really strong story... but i'm getting bogged down in the finer plot points.. i'm worrying that the audience might not understand and then i'm worried that i'll need too much exposition to get the point across... not good.  Whenever i get stuck like this, i look back at the scripts that i finished and re-read them.

We all know that a film needs a 'story arc'... it needs to have a beginning, middle and end...and along the way, the characters need to develop or learn something. It's not always easy trying to join the bigger plot points together though. Sometimes you end up writing pages and pages of un-necessary dialogue.

You need to remember though, don't start writing until you have the base for your story. Someone (the lead character) has to have a reason (often life or death) that they HAVE to do something unpleasant or dangerous or maybe just very very out of character. They have to do this 'thing' in order to either save someone (maybe themselves), or achieve something incredible, or maybe just to keep things the same. But the movie has to be about how and why all this happens... I've said it before, i think Steve Weiss from 'Zacuto' said it once: "Movies should be about an extraordinary day, not an ordinary day". 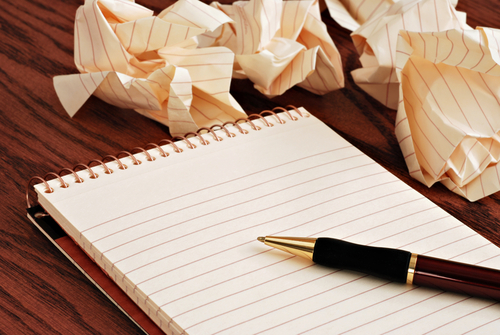 Once you've started writing, it can be tricky sometimes to keep the momentum going. What you need is a plan. I find this incredibly useful... The 8 Point Story Arc... taken from Nigel Watts' "Writing a Novel and Getting Published".


The eight points which Watts lists are, in order:


He explains that every classic plot passes through these stages and that he doesn’t tend to use them to plan a story, but instead uses the points during the writing process:

Stasis - Where the film starts... what world the characters live in... a normal day.

Trigger - Something happens...a letter arrives...someone dies... It's the event that starts the story.

The Quest - The start of the journey to resolve whatever it is that the trigger started... secondary characters are often introduced here.

Surprise - Obstacles, conflict and trouble for the protagonist. The middle of the film... the bulk of the action. In a Bond film, this would be the chases, the mission to track down the bad guy.

Critical Choice - Somewhere in the film, the lead character has to make a choice.. this will reveal his/her true character and probably dictate the rest of the film's atmosphere...depending on whether they made a good or bad choice.

Climax - The Critical Choice lead to this moment. The peak of the film's story.... but not the end of it. The moment where the huge crescendo of music stops... and we wait to see what happens next..

Reversal - This is the outcome of the Critical Choice and the Climax combined. Something happens that changes the status of your lead character or characters. They do something they wouldn't have done before. Often the 'feel good' moment of a film.

Resolution - Back to the 'Stasis'...but this time the 'New Stasis' after the story has changed them. Older, wiser and with the story now complete... unless you want a sequel, in which case you might drop a last minute twist or cliff-hanger here.

That's it.... don't hang about when the movie is finished. End it. I hate the current Hollywood fixation with dragging out endings. I don't need to see 'The Resolution' sometimes.... we can imagine it and i think movies often end more satisfactorily when you don't know if they want back to their normal lives or not.

I do find it useful to look at this list while i'm actually writing. It keeps me on track and reminds me not to get bogged down in scenes that don't add to the story arc. In 'The Addicted'...(my latest feature)... i ended up cutting 12mins out of the movie because we had several scenes that i later realised in the edit, didn't do anything for the story. By taking them out, the audience might have needed to think a bit more, but they wouldn't miss anything important to the main story... so they got chopped. But... if you can chop them before you go to the hassle and expense of shooting them, so much the better. I try not to think of the long hours and hard work that went into those 12mins of screen time.

This YouTube video from ScriptBully is good... it shows that sometimes, if not all the time, lists like the one above can be condensed down to a much more simple formula. Give it a watch.

Posted by Sean J Vincent at 2:01 PM No comments: 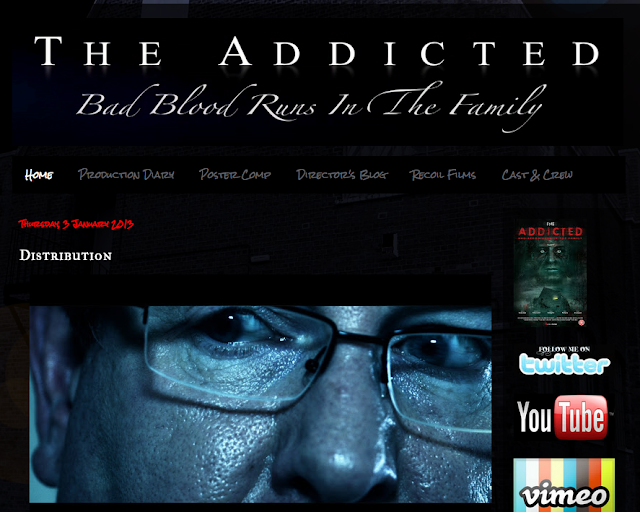 This is just a little post to ask you to head over to the website for my latest feature 'The Addicted', where i've done a little piece on where we're at with Distribution and a bit about the whole distribution question itself.  >>>>Click here to read it<<<<

Posted by Sean J Vincent at 1:38 AM No comments:

I found this on the Directors UK Website (http://www.directors.uk.com) and thought it explained a lot of what i like about Directing. I've spent the last 8 hours making and refining new grip gear ready for a big shoot in a couple of month's time...and enjoyable as it is to have new toys to play with, it's the possibilities they give you as a Director which is most exciting. New options for creativity.

And...for anyone that hasn't seen it yet... check out this incredible time-lapse edit of 'Rear Window' by Jeff Desom. (more info: jeffdesom.com/hitch/)

Posted by Sean J Vincent at 9:25 PM No comments: