Sony have recently announced the EA50... it's a large sensor camera which is like a bastard son of the FS100 and the VG10. It's not aimed at indie filmmakers or even ENG people... it's a wedding or event camera. If you shoot weddings or internet TV stuff it's probably perfect for you and a better bet than a DSLR as you can stick it on your shoulder and not worry about anything other than how it looks through the viewfinder. There's decent audio, a power zoom and even a good handle... it's the ideal event camera and it's very cheap for what it is. 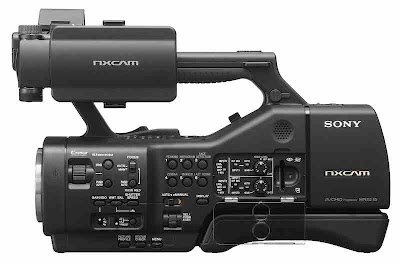 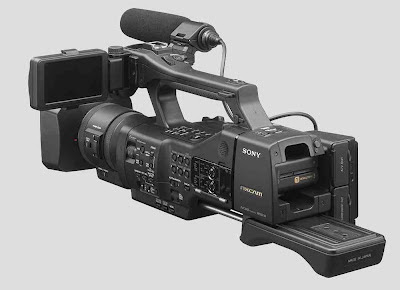 So... i don't get the whining already on the net about it's lack of ND filters or lack of the super 35 sensor or even the lack of dual media slots etc... get over it! It's cheap and it's designed for event work. If you want to get into interchangeable lenses and work on large sensors for filmic work and you think this isn't right for you...rewind a couple of years and re-visit the DSLR revolution. Or...save up for a secondhand FS100...they are cheap now. 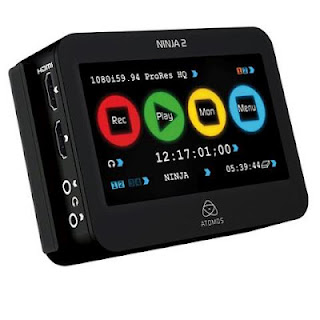 I just received my new Atomos Ninja 2. Wow... what a great piece of kit. I've already started shooting on it and i love it. It's taken the original idea of the Ninja to new heights. I really appreciate the new flagging system for choosing which bits of takes you like directly on the Ninja, while on set...genius. I also love the new shooting assist modes. False colour, Zebras, Focus Peaking, Blue Only... it all makes the shoot run much smoother and with less worry that i'm shooting crap. I'm already arranging some projects specifically to test the Ninja 2 further as i think it's going to be the mainstay of my rig for quite some time. By the way... the HDMI output on the Ninja 2 means i can carry the unit over to my big screen in the DIT area at any time and see my rushes without moving the camera. That is REALLY useful.  More on this soon....

Finally, we're almost done with the re-edit on 'The Addicted', my latest feature from Recoil Films. We've made some huge changes and i think the film is much darker and edgier because of it. I much prefer it. Release news soon....

Posted by Sean J Vincent at 2:51 PM No comments:

Making a music promo for 'Dance a La Plage'

For the second time, UK indie band from Banbury, 'Dance a La Plage' asked me to direct and shoot a music promo for them. They came up with the treatment and we planned to shoot the whole thing in a day.

As with most budget music promo shoots, the day was pretty hectic. I'd not seen the location or been through the treatment with the band but i knew it was going to be about coverage, as usual. The treatment involved the story of a boy and girl who meet online and eventually meet...the difference being, the boy is a dog and the girl is a cat...  it's to show the differences between people that you often don't see when you meet online. Finally... they both unmask. There's the band playing in their respective bedrooms as they prepare for their night out... so there's the kooky aspect of the band cramped into the corners of the 2 bedrooms and even a performance in the tiny toilet...just for a laugh.

The last bit of the day was spent shooting some action in a bar and also out on the street where there's a scene where the girl is being followed and the boy comes to the rescue. As before, the residents of Banbury were pretty cool with us filming out and about and only one pisshead got in the way... but we humoured him and he soon moved on.

I was in the USA when it needed editing, so i was working in various hotel rooms and on planes all over the US... i finally finished it back at home.

Like last time, i shot the promo on my Sony FS100 and captured to my Atomos Ninja. I love working with this gear... it makes everything so easy. Shoot...check and edit...all without and transcoding. I have my Mac Laptop on location so i can just put the drives from the Ninja into the dock and check the footage very easily.

As we were keeping things simple, there wasn't any budget or time for setting up complicated lighting, so we stuck to simple set-ups. I decided to go for some long, stark shadows and then put everything into a sepia kind of black and white in the edit. I'm glad i did as it gives it a really nice feel. Dan from OffBeat Music was on hand to 1st AD for me again... and i had him moving the lights mid-take to get some nice lens flares going...  bless him.

The edit was pretty tricky as we'd shot a lot of MSN conversations as part of the story and they looked really boring.... so i screened them over the top of the action and they worked much better. Matching the action to the performance aspects was hard and i eventually decided to ignore the background action in the performance shots and just go with the best takes regardless...i think this gives the timeline of the story a backwards and forwards aspect that makes it more interesting anyway. I edited most of it on FCP7...  but i did the finishing up in FCPX... i might even do the next promo i do in FCPX now. I've got so many plug-ins ready to use and i've slowly got my head around the slightly odd way of working... and i think it's finally stopped crashing... woohoo!

So, as is often the case with music promos, the first edit didn't float the boat of the band. They didn't feel the sepia vibe and they also wanted less of them and more of the story in the video. So i did a re-edit and re-graded the footage giving it back it's colour but in a 70's kind of style. It was slightly tricky as we decided to over-expose some of the close-ups and i didn't feel that they matched the wide shots as nicely as before, but the overall look went down well with the band and management.

Also, FCPX has started crashing on me again...and then losing all the work. Very very annoying. Not sure what's causing it. I have just installed the FCPX version of NEAT Noise Reduction...so maybe it's that.

Huge thanks to Dan Peters at OffBeat Music and all of 'Dance a La Plage', not to mention Mark and Nat from 'Also Known As' in Banbury.

Posted by Sean J Vincent at 6:38 PM No comments: