Why are we doing 'IS IT SHIT?' 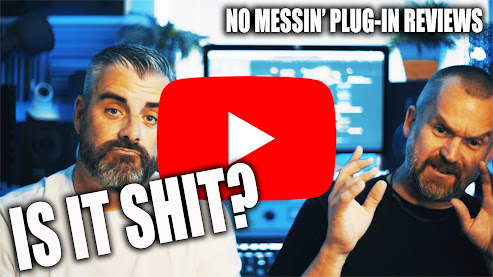 Between us, myself and Dan have over 50 years experiece of working in professional sound engineering. From recording and mixing in commercial studios to large arena tours with major artists...we've pretty much done it all.

Plug-ins and studio gear in general is a real cash-sucking habit for a lot of people, especially those who have never had the opportunity to work on the real deal and often rely on online reviews to steer them in the right direction. But...as you can often tell, a lot of online reviews are not much more than ads for the products. Also, there are a lot of video reviews that really go into the fine detail of each and every function of this stuff. That's great...but i found myself Googling for gear reviews which just got to the point... in other words - IS IT SHIT?

So that's how this strarted... just me and Dan chatting completely frankly about this stuff with no agenda whatsoever.

Do we know what we\re talking about? Yep... i've worked on SSLs, Neves, APIs, MCIs and pretty much every other desk at some point. Countless recording and mixing credits over the years. I've regularly used real 1176s, LA2As, GML EQs, Valley People De-Essers, PYE Compressors and even real analogue tape... i started as a Tape-Op...so i even remember how to align an Otari MTR-90. (only really old gits will know what that is). Dan's been working in studios since a little after the tape era and has many many remix credits to his name. We also both teach at a University when we're not in the studio...we're full time in the music production world... we're not bedroom producers with a YouTube channel.

What else are we going to review? Well, we might look at some hardware in the future...affordable stuff that might tempt you from spending all your cash on plug-ins... :)

Posted by Sean J Vincent at 6:46 PM No comments:

Check out the YouTube link on the right to see all these reviews...

Posted by Sean J Vincent at 6:12 PM No comments: