Episode 3 of 'The Addicted' Production Diary

Posted by Sean J Vincent at 3:37 PM No comments: 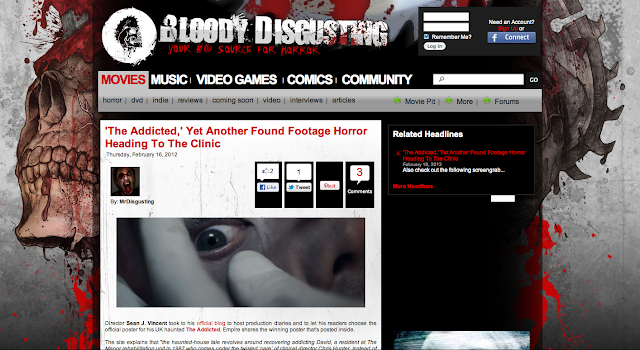 Famed horror website 'Bloody Disgusting' is running a news story on 'The Addicted'.  As we thought might happen, we're being touted as a 'found footage' film which isn't the case... but hey, it's just cool to be in the news for our current project.

The word is spreading fast....

Posted by Sean J Vincent at 1:56 AM No comments: 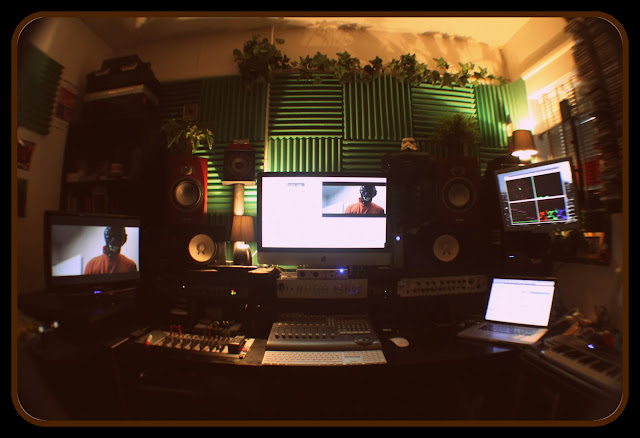 I thought i'd show you where the post production for 'The Addicted' is taking place. This is my studio in Hertfordshire.  As you can see, i've got an iMac running Final Cut Pro, and external monitor for checking my colour on and a 2nd computer monitor for keeping my scopes running all the time i'm editing.  The control surface is a Mackie Control which i mainly use for Logic, but also sometimes FCP.  You can also see my Yamaha and Tannoy reference monitors for mixing the audio. 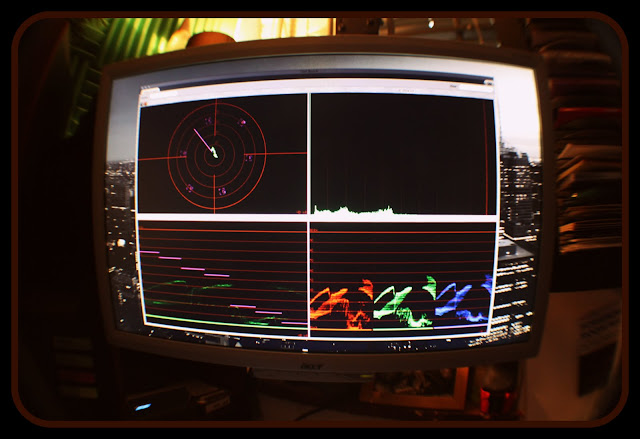 I keep the main lights off to avoid reflections on the screen while i'm working, i just keep the little lamps on which are behind the screen. My workflow has developed over the last few weeks and i now work in this way:

I'm about an hour and fifteen minutes into the film now and it's getting very frenetic... lots of action, which slows down the edit a bit, but it's much more exciting than editing dialogue.

Soon, i'll be making a start on the foley recording while Jonathan works on the dialogue editing and mixing. Then, it'll be time to add the music (once Jonathan has written it) and then do the final audio mix and colour grade. We're still hoping to be ready for May 2012.

I might have started working on another script too... but that's (literally) another story.
Posted by Sean J Vincent at 12:58 AM No comments:

The Addicted on Empire's Front Page... 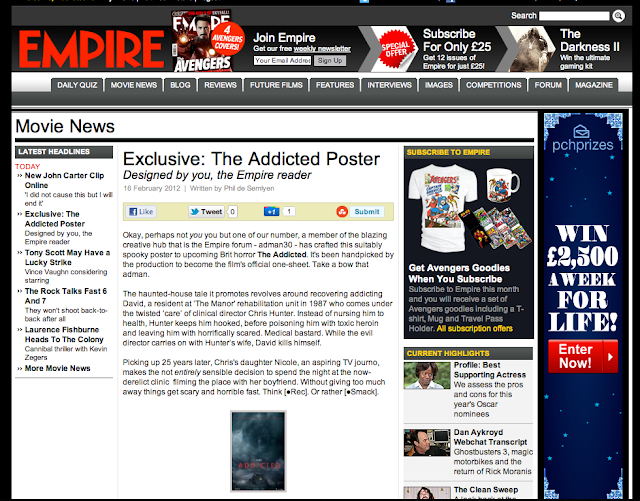 Or go to the site here: http://www.empireonline.com/news/story.asp?NID=33162 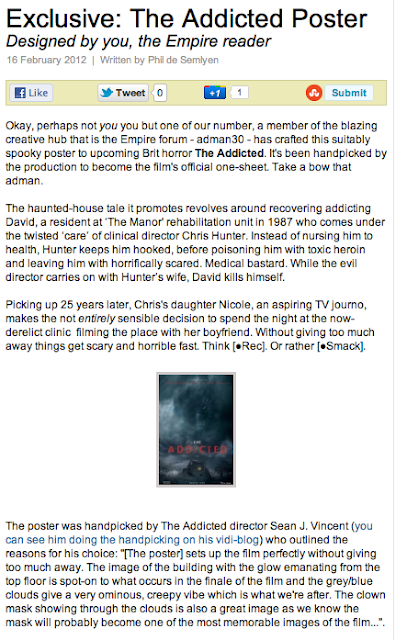 Hopefully this is the first of many mentions of what is turning out to be a very exciting project to be working on.

Posted by Sean J Vincent at 4:35 PM No comments:

I couldn't take my FS100 to Japan...not enough room... but i did take my Canon 550D. I shot this in Tokyo, Osaka and Kyoto using just the kit lens.

Posted by Sean J Vincent at 2:29 PM No comments:

Today I went to the BVE show at Earls Court. I didn't go last year, but I did go in 2010. Like last time, The Production Show had it's own section and was full of lots of interesting exhibitors to do with filming.
I didn't notice any new gear this time, but there was lots of Canon C300s mounted on various rigs and Sony had the new F65 on the CVP stand.
The H Preston Media stand was absolutely rammed with people picking up bargains, so much so that I could barely squeeze past. I saw Phil from HDWarrior there playing with a C300 too.
There was lot of interest in the Atomos Samurai... Quite a big queue on one stand to see the demonstration. After my positive results from the Ninja, I'd definitely look at the Samurai when I need HD-SDi input. The audio implementation looks fantastic too from the demo I watched.
I got to the show just in time to see Philip Bloom's talk on the CVP stand all about large chip cameras. It was pretty interesting and although I didn't learn anything new, it was good to get his views on the various pros and cons of the various cameras. Poor bloke sounded like he needed a week off though... 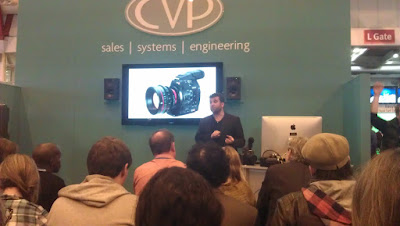 I picked up a very cool kit bag big enough to take my entire camera rig. It's huge, but pretty light and can also be used as a rucksack. That makes it sound small...but it's not...it would be a ridiculous rucksack, but it's nice to have the option. I also saw a really nice small jib on the H Preston Media stand... I don't need one right now, but will definitely get one before the next feature shoot.
Any other news from the show? Nope...  But it was interesting to see that there were far fewer REDs and DSLRs used for demo'ing rigs than when I was there in 2010. Progress....

In this episode i talk about starting the post production process...file management and also where the idea came from for the film in the first place. There's also some examples of colour grading and a look at some of the posters designed for the 'Empire' Forum competition to come up with our official poster.

I've been lucky enough to be working on some gigs in Japan for the last few days and i'm here until the end of the week. I couldn't bring the Sony FS100, but i did bring my Canon 550D, a tiny tripod and my intervelometer for some timelapses. I know timelapses have been done to death, but it's only for my own amusement and i like them. I've also been out on the street getting some handheld shots. I wandered around downtown Tokyo the other night shooting as many 'BladeRunner-esque' type shots as i could. Tokyo is so crazy to look at it.. it's a film-maker's dream. Lots of light, lots of people and more interesting streets and buildings that you'd find in a week of searching in most cities.

I'm working on the edit for a little short just showing what i've seen since i've been here. It was going to be all based around Tokyo, but today we went to Kyoto and saw some ancient temples which were pretty stunning, so i had to shoot them too.  I'll probably have to wait until i get home before i get a chance to finish it, but i'll upload it here soon.

For now, check out some pics i took: 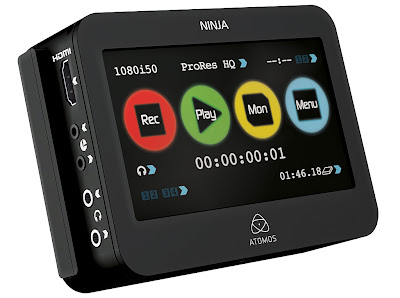 I just installed my update and it works as described. The red lines at the top and bottom save you from having to flip the screen overlay on and off to check if you are in record... a really useful feature.

Another idea i think would be useful is an additional foam insert for the hardcase to allow you to just store lots of disks for the Ninja as i keep my Ninja on my rig, which has it's own case... and my dock lives in my DiT case... so the nice hard case doesn't get used. But... it would be perfect to keep the disks in if there were more dedicated inserts for them.