I'm off on a long haul flight tonight, so i've been packing and ripping some DVDs into my Mac ready to watch on the plane. While all this DVD ingestion has been going on, i've been browsing my Twitter feed and catching up on all the other Film/Video related blogs out there.

There's a hell of a lot of back-patting from one indie film maker to another on Twitter at the moment. I guess that's what's known as a community... but it's a little worrying too. In the last year or two, lots of film makers (myself included) have begun networking with other film makers. Often, the common ground is either what they shoot on (DSLR more often than not) or how they go about raising finance (indiegogo, Kickstarter et al) or how they publicise their films. (Twitter, Facebook etc)  There's nothing wrong with this... it really has generated an interesting film making community. But i can't help thinking we've just homogenized into one big blur of desperate and less diverse film makers. 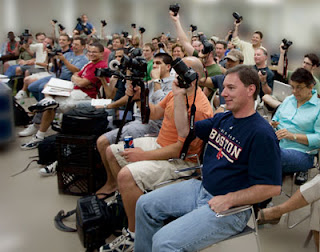 There's always exceptions. I've become 'twitter' buddies with some of them... people who have vision and see it though... for them i have nothing but respect. But... some film makers out there are not making films. They are talking about it... raising their profile...raising money...but not actually making films.

I hear very little talk about plots...about casting... about the craft of putting together a production. Very little of it has anything to do with what you shoot on or how many facebook friends you have. As i found out very early on in my first feature... if you've got a script and a camera.. you are nowhere near ready to shoot a film. The sheer size of the logistical nightmare that is awaiting the indie film maker is staggering.  I'm not going to go on about it... those who have done it know what i mean, and those who haven't will find out.

Now, there's definitely some hypocritical spewing from me today...  i love to talk DSLRs and i love to big up indie directors on twitter sometimes... but i really hope we can all keep the big picture in full view. We're in this to make films... not talk about it.

And that brings me neatly to my next subject.. my next feature 'Their Law'. We've booked the auditions for the first round of talent...and we've sourced the locations. It's a case now of getting the permits...securing the talent and then and only then...having a serious think about shooting format.