Just before the Cannes Film Festival kicked off, i got an email from Celluloid Dreams / The Auteurs (now called Mubi) about a competition they were opening up to all the film-makers with shorts in the 'Short Film Corner' part of the festival. It was called 'Cannes å la Flip'. They wanted us to send in a 300 word pitch for a 3 min film to be shot on a Flip UltraHD while in Cannes.

Anyway, a 300 word pitch later and i get an email asking me to pick up my Flip camera from their stand in the Palais. What they didn't say though, was that i get to keep it. Result! 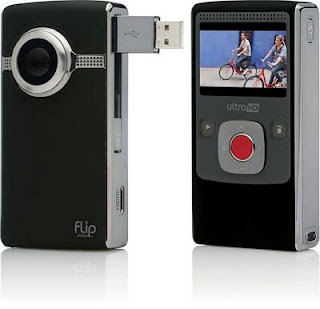 The Flip UltraHD is chunky.. it's a bit like a mobile phone from a few years ago. But...considering it shoots 720p HD and has an 8GB memory...and a built-in flip-out USB plug...and a mini HDMI port...it's small really.  It fits in your pocket...but maybe not in tight jeans. Btw - 8GB gives you 2 hours of 720p recording.

Using it is as easy as it gets. Turn it on, press the red button and you're shooting. It boots up in 2 seconds, so it's great to grab it when things happen that you suddenly want to film. You can playback, erase and even use the digital zoom (but i try to avoid it)...it's so easy to use.

The picture quality is quite amazing. It's very detailed and holds up even in quite dimly lit situations.
My only gripe really is the lack of anti-shake. To get the best from it you really have to hold it against something like a wall or a table to keep it steady.

I'm totally Mac, so i can't tell you about the free PC software that comes on the internal memory. It just shows up as an external drive on my mac and i drag and drop the clips just like any others i use.


For me there's some big reasons all directors should get a Flip UltraHD.

1) It shoots very usable 720p HD video but it fits in your pocket.

2) You can velcro / gaffa  it to anything for incredible shots... car shots, helicopter shots...you name it.

3) It's easy to charge on the go and even lets you replace the rechargeable battery with 2 regular AAs if you need to.

You might have guessed...i highly recommend the Flip UltraHD.
Posted by Sean J Vincent at 12:01 AM