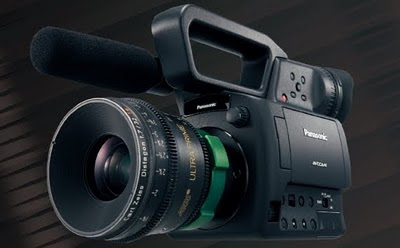 A 4/3-inch Image Sensor with Digital Still Camera Technology
The same digital single lens still camera technology that’s gathering widespread attention for its innovative motion image techniques, has been applied to this camera recorder.
The 4/3-inch MOS image sensor, with an imaging area similar to that of 35 mm movies, lets you easily shoot film-like movies with the shallow depth of field and soft focus of a film camera lens.

Extended Recording in AVCHD High-Quality PH Mode
The AVCHD recording format used by the AG-AF100 includes a professional PH mode with maximum AVCHD bit rate for stunning image quality. Two SD card slots allow continuous recording for up to 12 hours* in PH mode and up to 48 hours* in HE mode with two SD (SD/SDHC/SDXC) cards on board.

This looks just like the camera a lot of us have been waiting for. I'm not going to get rid of my DSLR, but this will definitely be a camera that can take over a lot of duties that the Canon is being used for. For my feature drama work, this camera could become the 'A' camera i've been looking for.
Posted by Sean J Vincent at 7:18 PM