Failing on the way to winning... 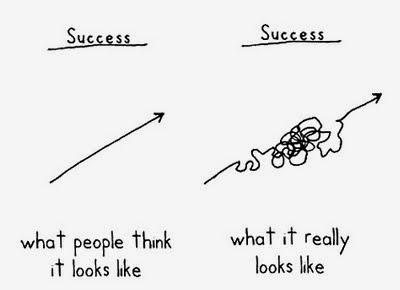 I'm the first to admit that i'm learning as i go along. I have no training in film whatsoever. I made my first ever music promo about 10 years ago and then didn't pick up a camera again until 2007 when i decided very randomly to make a feature. With no experience and quite a lot of arrogance, i made a micro-budget feature. Bizarrely it got distribution after being available for free on YouTube for a year. It really was utterly awful... bad camerawork, bad lighting, woeful dialogue and and some truly laughable plot holes and acting...(mostly by me)  But... i learnt a lot.

At this stage, i started shooting more music promos and shorts. I realised i needed much more experience behind the camera and also operating the camera! Slowly, i started getting to grips with it.

Now, i could (and some say, should) have released this under a pseudonym, but i'm not scared to show my self-taught efforts... even if the reviews are sometimes painful to read.  I have no excuses for the sub-par end products. No one cares that i didn't spend much money or have an experienced crew, and why should they? I just need to be better.

The funny bit of all this to me is that i'm i'm a very experienced professional sound engineer who travels the world doing world class live mixes for some huge music artists... without blowing my own arse-trumpet - i'm really good at it...  i've been mixing professionally for nearly 25 years.  I see people trying to teach themselves my job and it's funny sometimes... some people just aren't cut out for it.  Am i one of those people, but in the film directing arena? Shiiiiit.... i hope not.

Since then, i've shot upwards of 14 music promos, several corporate promos and another feature...

Why another feature? Because it's the only way to learn. To learn screen writing, to learn direction, to learn good casting, to learn better camera work and editing....  all the music promos in the world don't teach you how to helm a feature. It's brutal. It's unforgiving and it's the only way i can progress.  I've seen features by some very experienced TV promo directors and they suck... it's not easy, no matter how much experience you have.

Is this one better? Yes. It's a quantum leap ahead of anything else i have done. Why? Because i honed it down to the necessary. I kept it simple, i kept it small and i cast people that genuinely 'pop' on camera....people who made me realise how much of directing is casting. It's fantastic to see my screenplay come to life and not want to hide behind my fingers while i'm watching it back.

What's next? Well... i've been busy on the post for 7 CASES most of this year. I'm proud of it and i think it's given me the confidence to ramp things up for my next feature.  Will the next one be perfect? Let's hope so! But in all honesty, it might take a while longer before BAFTA come knocking... i might never completely suss this game out... but i'm going to keep trying and if i can improve each time, you never know.  Like i've always said... just keep going.
Posted by Sean J Vincent at 5:23 PM