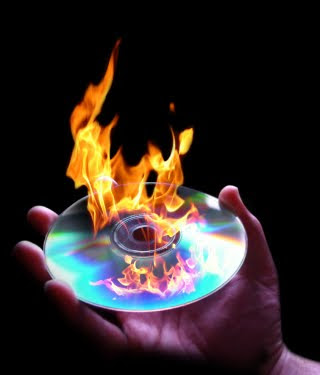 I've spent the last few weeks working on the DVD for our 'Shoot The DJ' movie. I spent days making the background images in photoshop, hours crafting the menu system so that it flows and looks great...and literally weeks trying different compressor settings for compressing the 20GB film file down to a 4.8GB mpeg2 to fit on the dual layer DVD. (along with various other bits like out-takes and trailers)

I have run into several issues. Firstly, compressing to mpeg2 is depressing. It takes a nice looking master and makes it look pants. I've tried CBR, VBR, Apple Compressor, FFmpeg and even paid for a Sonic SD-2000 professional encode.. but, it always looks like we shot the film on mobile phone by the time it's finished. 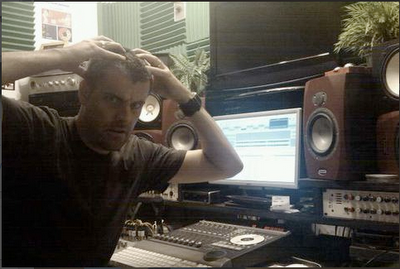 What i have learned is this: If any of your source footage is not up to scratch, it will totally suck by the time mpeg2 has got hold of it. So, if you've got a dodgy bit of footage in your film...maybe a little too dark and starting to show the signs of noise in the blacks...even just a little bit...compressing to mpeg2 will destroy it. We had a scene which was under-exposed when it was shot. The original footage looked a bit dodgy, but we decided it was probably ok. We were wrong.

All the daylight or nicely lit shots look ok. Not amazing..but certainly ok and most people won't see any issue at all with them, but the noise in the picture on the dark scenes is definitely distracting to the viewer.

Anyway, once i'd accepted that picture quality was just something we had to learn by and move on, i came up against another major issue... DVD Studio Pro 4. I had completed my DVD building and was in the process of setting the 'break point' for the dual layer. I placed the marker at an appropriate place in the film, ticked 'break point' and un-ticked 'chapter' and then in the main DVD menu section, i selected the right break point from the drop down list. I then burned a test DVD. The test didn't work too well. The encode looked rough and the break point wasn't as good as it could be. The menus also were a bit erratic.

So... i changed the mpeg2 movie file for a new version and then re-set all the chapter markers and set my break point marker. But...this time, i couldn't change it in the drop down menu. It would only let me select the previous marker or 'automatic'. All the other markers were in the drop down menu, but none of them would stay selected. So..i tried to delete the track which the marker was set within.... it wouldn't delete. I tried deleting it from the graphical view, from the connections tab...nowhere would let me delete it. Then i tried removing all the connections to it..from all the menus and the other files in the DVD. Still, it would not let me delete it.

It turns out, that the mpeg2 file that i had the break point set within had some kind of corruption in the file. I had to re-encode the file and start again. Now, with all the work on the DVD menu and other assests, i  didn't want to start from scratch...but if i tried to re-use the same file, it wouldn't let me delete the old file...so i found a way out. 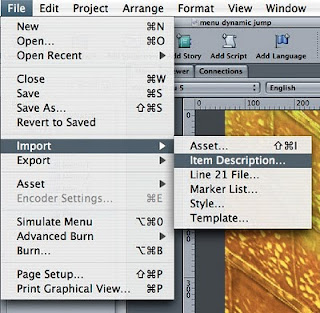 I highlighted each section in the graphical view and then exported it using file/export/item description.

Then, i started a new project and imported the item descriptions for all the various bits and hey presto...i was back on track...and all the connections were still working. But... the nasty offending file was long gone. All i had to do now was create my DDP files and burn them to DVDRs. Easy...

From now on i'm looking at new delivery methods...from well shot HD...never skanky SD again....it's too much stress!
Posted by Sean J Vincent at 1:00 AM