Sony Show a Glimpse of a Large Sensor Cam for 2011 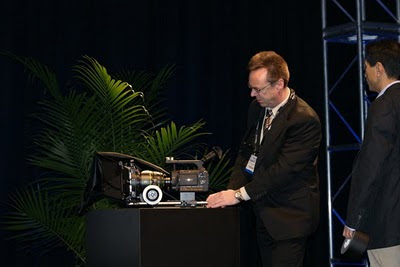 Sony - New Small Prototype Digital Cinema Camera - NAB 2010 - Playback from camera department on Vimeo.
Sony unveiled a new prototype for a small digital cinema camera at their NAB 2010 press conference. The camera is scheduled to be released at next year's NAB.

Sony's Twitter feed leaked this pic out earlier from NAB in Vegas. It's their take on the large sensor 'shallow depth of field' type camera to rival the DSLRs. There's not much detail or specs, so it's mostly speculation, but that's a 65mm prime on the front and it looks like a flip-out LCD screen and all the trimmings you'd expect from a video camera as opposed to a DSLR. It will use SXS cards and has a full 35mm sensor...great news.  Slated for a 2011 release, this sector of the market is really hotting up. I'm sure the RED Scarlett is going to be great, but the age it's taken to get to market is going to really hurt their sales if Sony and Panasonic have similar rigs coming up... and that's without Canon showing their hand yet.

However you look at it, it's great news for film-makers. Let's just hope we can use a wide range of lenses on these new cams and that they keep the prices sensible.
Posted by Sean J Vincent at 11:41 PM