As lots of indie film makers find out, getting a project off the ground can be a nightmare. From finding like-minded individuals to help you to finding the funding for the production...there are obstacles every step of the way.  It's very easy to talk a good game.... there's plenty of people on the net who are happy to tell you about their next project and how it's all going to work, but very few of them see it through and lot of them never even get started.

David Baker is someone i have been chatting to on and off for a while now on Twitter. He's an indie film maker from Scotland. He's made one film from within the industry with full funding etc and another he made himself with a tiny budget. He's seen both sides of the fence and he's ready to make another movie. David has hooked up with American film maker Oklahoma Ward and actress Nicole Alonso and they have some big plans. They want to make 2 features, side by side.... David's 'Screen' and Oklahoma's 'Crawl'....both horror in genre and both great concepts. Their plan is to set-up a new indie film studio and make it a long term project. So, to get things moving they are planning a documentary covering the making of these two films and all the behind the scenes trails and tribulations that will occur. The doc is called 'Hardcore Indie'.  If you're interested in film making, supporting their project could bring many benefits, not the least of which is benefiting from their experience and the regular video diaries and updates on the project they are planning. 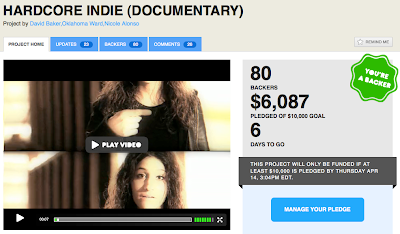 Please go and check out their KickStarter page... there's only 6 days left for you to get involved. I'm sure they'd appreciate any kind of donation at all.... and you'll get plenty in return.