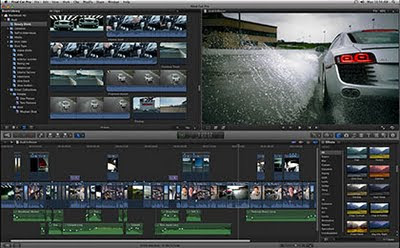 Wow...there's some proper whining going on in cyberspace today. Every film maker under the sun is bitching about the new FCP rebuild...FCPX.

For the record, i haven't got it yet... i'm going to get it next week though. Here's my problem with the whingers; Why? Why are you whinging about a product that you didn't own 2 days ago? A product that didn't exist... a product that does things in a new way that allows you to work faster..?  You're all expecting Apple to release a fully matured product that does everything FCP7 did and more. The thing is, Final Cut has been slowly improved and added to over the years to make it the product that it was... it didn't happen overnight.

When Apple released Logic 8 a few years ago, it was the first big re-build in years... people moaned...people wanted all the old features back...and, eventually, not too long later...they got them...and much, much more.  I have faith that Apple know we need OMF, XML and EDL support...as well as external monitor capability... and we will get them soon. People moan that Apple never let us know what direction they are taking software in.... well this is how they show you. You can jump in early and learn as it matures. And if you don't fancy that... just wait. Your old FCP still works fine.

A lot of people have got quite angry over some very little things too...and often without reason.

Don't like the magnetic timeline? You can turn it off.

Don't like the thumbnail look to the tracks? You can turn it off.

Prefer a list for your imported footage instead of thumbs? You can do that too...

You like to program your keyboard shortcuts? You can do that...

You see? It's not that bad... and there's no rendering...there's live previews of FX...there's colour matching, there's audio syncing, there's some great anti-shake and rolling shutter tools. Basically, it's pretty amazing... just give them a little while to get some updates out and it'll be awesome.