Atomos Ninja... after 2 weeks on set. 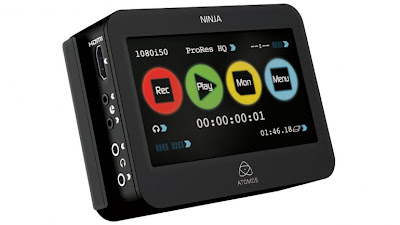 A few weeks ago, i bought the Sony FS100 and an Atomos Ninja Pro Res recorder. I decided on the Ninja after months of reading up, testing and research.

One of the first things i did was update the software to Version 2...this gives you full quality playback which is vital in the field.

I meant to buy a pair of spinning drives and an SSD for all the action shots we would be shooting. As it turned out, we never got an SSD...so the whole shoot was done on regular spinning drives...and only 5400rpm ones too. There was lots of running around with the FS100 and Ninja on a shoulder rig... and only twice in 2 weeks did the drive not cope. Both times the rig was being really shaken about. All the other times it performed perfectly. I think this proves that Atomos are right... for 99% of the applications, the regular spinning drives cope well enough.

It was so nice to be able to whack the drives into the docking station and check the rushes back on my MacBook Pro. We could see instantly what was working and what wasn't. Things like strobing... which often didn't show up too clearly on the monitor were all too evident once the footage was viewed full size on the Mac. This kind of flexibility is what makes the Ninja system so perfect for feature shooting.

The dual battery system meant we never lost power...and they lasted for ages!

Problems? Well...not really. The only slight issue i have with it, is that you can't erase a take you know isn't needed... you can only format the whole drive. (on the unit itself) And... sometimes the take numbering goes a little astray... but if you're good at keeping logs, you won't get lost.

The more full the drives get, the slower they access the files for playback... this can slow you up a bit when you're checking back takes on the Ninja itself. But it takes no time at all to whip out the drive and replace it with a fresh one... so it's no biggy.

There's been a lot of talk on Vimeo and other sites that the Pro Res files on the Ninja don't look any better than the FS100's native AVCHD files... and to some extent, that is true.... right up until you try to grade or colour correct in anyway. The Pro Res files let you really go to town... you can pull and twist the colours and it really takes a lot before the footage breaks up. The original AVCHD files do not behave this way at all. You can whack a Magic Bullet preset on them, sure... but you try and do anything more adventurous and you'll come unstuck. We're shooting everything really bright and well lit and then darkening the whole thing down in post.... this only works without adding noise and banding using a high bandwidth codec like Pro Res. AVCHD is fine for weddings or event video stuff...but for indie features? It's not good enough.

If you're looking to shoot something great with one of the new large sensor cameras, you'd be mad not to try and capture as much information as possible before you start messing with it in post.

Other stuff?  Well, it comes in a seriously good quality case...with 2 batteries, a dual charger, a really nice docking station with 2 x FW800 and USB2... and all the cables you need. I used 2 x 160GB HDs in it... i know there are bigger... but 160GB was perfect for one days's shooting and it meant i didn't have hours and hours of footage living precariously on the Ninja drives before the nightly back ups were made.

So... there it is. The Ninja rocks. Oh and one more thing. I really needed a short HDMI cable... and the only one i could find cost £5 in Tesco. I could have spent 10 times that... but the cheap one worked perfectly. It does my head in that Hi Fi nerds say you need expensive cables... as long as you're not constantly plugging and unplugging... cables are cables as far as digital data is concerned. They work, or they don't...   and my £5 cable worked fine...and it's still going.

I'm looking forward to shooting on the Ninja again this week and on future productions. It will be interesting to see what other functionality Atomos add to it next.