BlackMagic Design have announced version 2 of their popular HyperDeck Shuttle SSD recorder. It's pretty much the same as version 1, but it adds the option to record not only to uncompressed files, but also to Avid's DNxHD compressed codec. Much like Pro Res, DNxHD boasts much smaller files sizes than uncompressed, but with almost no noticeable difference to the eye.... and considering the cost of SSD drives, that makes the HyperDeck Shuttle a much more attractive proposition. The Shuttle is still a bargain at just $345. 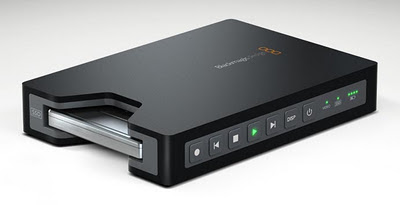 BlackMagic Design have also addressed the problem of mounting the Shuttle on your camera rig. No more will you have to gaffer or cable tie it to your rails... the mounting plate makes life far easier. For $99, it's probably worth it just to know your Shuttle (and more importantly, your footage) is safely mounted. 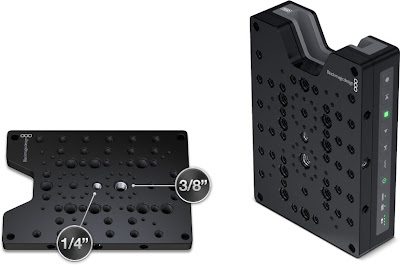 GoPro have just announced the new Wi-Fi Backpack & Wi-Fi Remote Combo Kit  for their GoPro Hero2 mini camera. It basically gives the Hero2 Wi-Fi which means it can then be remotely controlled via various smart devices such is iPhones or iPads. Also, it allows you to stream video over Wi-Fi so that you can capture both on the SD card in the camera and on your laptop/smart device or the web at the same time all by using a free GoPro App.  For aerial based work, this could be invaluable... it also gives the Hero2 a serious advantage in the 'crash cam' stakes. If the footage is not in the device... you don't have to worry about damage. (apart from the hit on your bank balance) It's waterproof too. 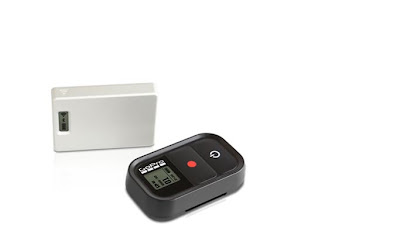 I should point out that the original GoPro Hero HD does not support streaming over Wi-Fi... only the remote control options will work... for the full streaming experience you will need the Hero2. The remote can control up to 50 GoPro cameras at the same time.

The Combo kit is due out in March.


'The Addicted' News
Today was another full day of editing. It was also another day spent wrangling with FX. There was a scene where an 'entity' has to appear... be menacing for a bit..then disappear. (not too tricky) Then there was a scene where someone has to be completely enveloped in light...almost like an explosion, but more paranormal. We shot the scene using some very bright lighting effects on set...which gave me a very good start, but i needed more. It fell to some slight 'mis-use' of some Magic Bullet looks tools to get the effect i wanted. All i need to add now is the final element which i've been working on in After Effects this evening. Hopefully all the elements will fit together tomorrow and i can move on to the next scene.

When i'm just cutting regular scenes...people talking/walking/moving about etc... i can get lots done in a pretty short space of time. Even with multiple camera angles, i should be able to get 5 minutes of screen time cut in a day. It may not sound like much, but it's quite quick. But, as soon as there's FX shots...things slow down. It took all day today to do a scene which was no more than 10 seconds long.

Right... it's late and i need to watch some mindless TV for a while to unwind.