CrowdFunding... is it getting annoying yet? 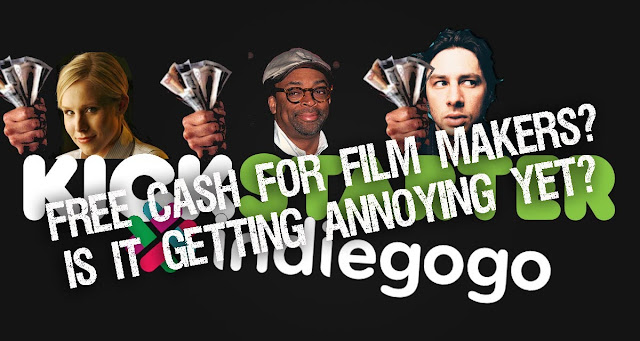 So, it's been 4 years since Kickstarter....errr....started. The crowdfunding phenomenon isn't new, but it is new in this particular form. Come up with an idea, shoot a pitch video and upload...then just wait for the cash to roll in - or not.

Years ago, bands like Marillion asked their fans to fund their records and that worked really well. The fans got the records they wanted and the record companies were left to concentrate on what they do best... talentless shit for the masses! (I jest...a bit)

Film funding has always been a tough subject. There's the 'establishment' side of things where you apply for funding from the BFI, production companies and film studios... they say yes or no and if they say yes, you put up with the artistic constraints they will put upon you. On the plus side, you will make a movie that will get column inches and a chance at success unless you are really shit at your job. On the minus side, you will have to tow the line.. you will have to make changes and you will have to work to a schedule you might not like... it's called compromise.

The other route is private funding from outside the industry. Attracting investors isn't easy and they want their money back plus a decent sized profit on top. That's fine as long as you've got a decent shot at getting a release, but for a lot of film makers, that's an unknown quantity until the film is finished and the results can be scrutinised.

So where does crowdfunding fit in? A few years ago it was small projects...first time film makers usually trying to raise five or ten thousand dollars to get their passion project made. Then it all started taking off. Film makers started pitching for bigger and bigger budgets and some of the time, it worked. But at what cost? How does running a crowdfunding campaign affect your online profile? Firstly, it means repeatedly asking your online friends for money. We all know how embarrassing asking friends for money is. Imagine asking thirty times a day for a month - that's crowdfunding. Some online crowdfunding producers like to say 'i don't want friends supporting me...i want fans supporting me'. Well, that's cool, but if you think you can suddenly differentiate between friends and fans unless you're already a famous director, your 'fans' will soon get the arse with being put in the 'fan' bin.

Another issue is, does this really count as free money?  It's not an investment.. and because you're not a registered charity, it's not a donation either... it's a sale. They are buying something - usually a perk of somekind...a DVD, a signed picture etc. So that means it's taxable income. Are you declaring it? Because pasting it all over the internet might attract the attention of Mr Taxman. Suddenly you need to factor Tax into the equation.  Also, remember to do your maths. Don't promise DVDs and signed posters and T-Shirts etc, and then not have the cash left after the shoot to get them produced and shipped... it happens. I've invested in several projects that never followed through on promises.

So why do i find crowdfunding annoying? There's a few reasons and most of them are based around the idea that this is somehow morally superior to asking people to work for free or for deferred pay. I know a few directors who are very snobby about people like myself getting a crew to work for free... but really...what is the difference? I ask people if they are up for giving up some time to work on a project and if it goes to plan, they will get a cut of the profits. It's no different than asking a bunch of people for free money only to then use that money to hire a crew etc... it's just cutting out an un-neccessary step. It's also starting to smack of 'jobs for the boys' again.  Why use other people's money (that you never have to pay back) to hire people and buy kit? What's in it for them? They often don't realise what you are actually doing with their money... if they did, they might have a better plan.

I think true transparency is the way forward.  Crowdfunding campaigns should be made to describe exactly where the money is going and how the long the project is going to take to complete. There's way too much ambiguity with Crowdfunded projects. Deadlines drift and expectations are lowered as the funds get whittled away...  Just look at Spike Lee's KickStarter campaign. There's almost no mention of where the money will go or even what the film is about?!! It's a case of 'I'm famous, you can trust me..'  That brings me to my last point..  fame & crowdfunding.

Wheather it's Veronica Mars, Zach Braff or Spike Lee...or any of the soon-to-be-announced Kickstarter campaigns by famous people, the question has to be this: Why should people GIVE you the money? IF your idea is a sound business, you would easily find either industry or private investment and that's without even mentioning the fact that you have millions in the bank and could fund it yourself!

I've heard that they (the famous kickstarters) see this as a chance for their fans to invest in their work and be a part of it. Really? Bollocks. What do you think your fans were doing when they bought those cinema tickets? That's right...they were supporting you and getting involved... you've already got their money. But no, you want to keep THAT money safe and sound in your investment portfolio or property investments.

I do understand that crowdfunding gives fans the chance to get films made that otherwise would never see the light of day....and to some people, that's reason enough for it to be a good idea. My issue is that it takes the risk out of the production for the producers... and at the same time, skews crowdfunding platforms.. What began as a way for the little man to fund his movie will turn into an uneven playing field where established film makers will use their fame and PR clout to drive people to their campaigns ahead of the competition. And what about the studios, distributors and broadcasters? I bet they can't believe their luck! The audience are covering the production costs upfront!!??  Fantastic! Let's see what else we can make them pay for!

With all that said, i am not completely against crowdfunding. I do find it annoying and degrading (i've tried it in the past) but most of all, i worry how it's going to end.  What if Spike Lee's film gets made, comes out and is a massive success? Will the kickstarters feel good? A little bit cheated Spike got richer and they didn't? Who knows?  And what about after that... what if Zach Braff's film is a success....it clears several million dollars in profit. Will he use that to fund the next one? Or go back to Kickstarter?

It's all food for thought people...