Paradox - A New Web Series - We Need Sponsors and Advertisers 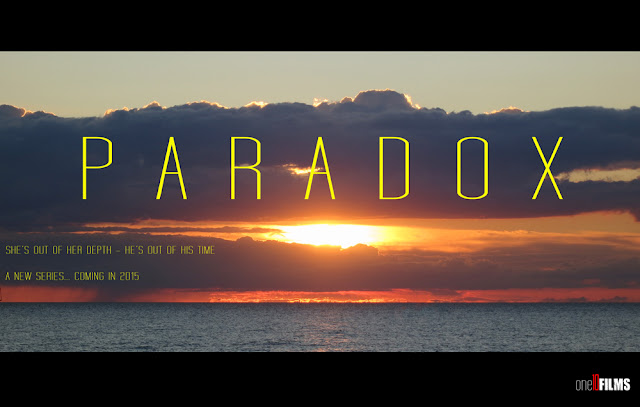 This summer, we're shooting the pilot and then two further episodes of a new series called 'Paradox'. Its the story of a time traveller who arrives in 2015 but the process has left him with no memory of who he is, why he's here or when he is from.  Rescued by a random stranger, he begins to piece together the puzzle to find out the answers.  His time machine is clearly ahead of current technology, but it's suspiciously littered with components that date from the past, not the future.  Our protagonist is not left wondering for long as his past (or future) begins to catch up with him.EDIT>>  Some people have been asking what the 'journey' is for the main character... what is he trying to achieve overall throughout the series. Well, i didn't really want to give too much away, but i guess it's ok and if it helps get it made!  So the protagonist discovers he travelled from the past leaving his 10 year old daughter wondering what happened to her Dad.  For reasons i won't divulge, he can't find a way to get back to her... this is what he is trying to do... this is his ultimate goal. Along the way, he has to avoid countless agencies and organisations from around the world who are trying to steal his technology.

Using the latest in cinematography techniques such as stabilising gimbals, 4K acquisition and low light shooting, we are able to work quickly and efficiently.  We are also writing only key dialogue and then work-shopping or 'ad-libbing' a lot on location.  Talking of locations, we have some fantastic settings for this series which are very much out of the ordinary...

We are teaming up with various companies to bring this production to life. We have sponsors for most of the key elements, but we are looking for more.

These are the areas we are looking for help with in the form of gear donations/sponsorship:

Digital Storage - SSDs and HDDs for the footage and back-ups.

Catering - It's a small crew and cast, but we've got to eat/drink.

Accommodation - A hotel chain tie-in would be very handy.

Car product placement - Our characters travel in a car a lot...  anyone want to lend us one?

Watch product placement - This story is about time. We need a cool looking watch for our hero.

Why would potential sponsors get involved?

We're going to be putting brand advertising at the start of each episode. A short combined ad that says something along the lines of 'This series is brought to you by - ....' and then a flurry of trade marks and possibly some longer explanations of what each sponsor does and how they can benefit you.  This ads won't be like YouTube ads that can be skipped, they will be part of the opening of the episode.

There will be press coverage of the project in broadcast/film publications.

We will also be tweeting regularly from the set and from the post production suite about what we're using and will post web banners etc from each sponsor on the official website.

We are planning on this being a gritty, adult orientated series, with a particular slant towards Sci-Fi fans. That's a huge market...

Initially, the series will debut online for free. The first 6 episodes will be available on YouTube at no cost to the viewer.