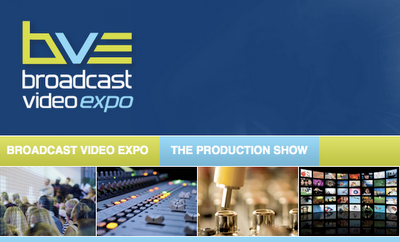 Yesterday i went to the BVE in London.  I've been to many expos over the years but this was my first one dedicated to Film & Video production since i got involved in the business a couple of years ago.

All the usual suspects were there. Panasonic had a great stand where you could try out their camera range on the arranged Thunderbirds memorabilia set up in front of all the cameras. I had a play with the HMC151 and also the HPX171. I'm a big fan of Panasonic and i love the small form factor of the 151, but i was a bit disappointed with the small LCD display... i wish they had re-designed that side of the camera... it's almost indistinguishable from the DVX100.

Sony had a similar stand with some breakdancers in the middle and all their cameras around the outside for you to play with. All the cameras were hooked up to HD monitors mounted up high too..so at least if you couldn't get a go on one...you could see what kind of results people were getting with them. I had a long play with the new NXcam. It's a solidly build camera and I really liked the feel of it. I ended up having quite a chat with a Sony sales guy about it. He was very eager to explain it's strengths and very quick to put down the Panny HMC151...i didn't even mention it.. he just said it was an inferior camera in every way. I then mentioned that i was about to buy a Canon 550D. He corrected me and said 'Don't you mean 5D mk2?'.. so i told him that there was a new cam on the scene for less than a grand.. He looked a bit sick and then told me that he'd used a 5D and it was terrible. He said Phil Bloom only made it look good cos he only shot faces and soft scenery shots...but if you tried to shoot anything with straight edges, the picture totally falls apart. I told him i thought DSLRs were good for what they were good for and it was still wise to have a 'run of the mill' camera... i was trying to cheer him up. I don't think it worked.  haha.

Anyway, i headed over to Canon and there was the new 1/3" chip, 4:2:2 MPEG2 cam sitting in a glass case...  I was a bit surprised at it's size...bigger than i thought. It looks pretty sturdy and the lens is bigger in diameter than i was expecting.  I guess it's pretty similar looking to the HDV cams they've got in their arsenal already...only a bit...chunkier? Will be interesting to see one in action soon... 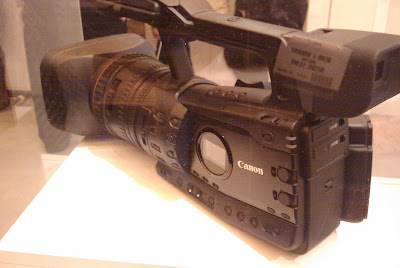 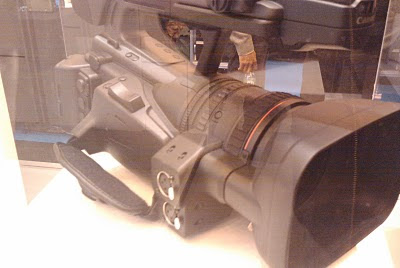 Sorry for reflections all over the pics... it was housed in glass and it's the best my HTC Hero could do in the circumstances. Not a whole lot different from the pics i found of it last month, but it's looks like it's going to be a well spec'ed  camera and possibly the ideal partner to a Canon DSLR for when you need to avoid the issues like rolling shutter and the 12m shooting limitation.
Other notable stands i saw include the Hague stand. We all know Hague do some great grip stuff at very reasonable prices, but their stand was mobbed every time i walked past it. Their jibs and camera mounts were very popular.  I love that they produce gear film-makers need at prices we can afford.
The F-Stop Academy stand had some nice DSLR rigs on show from Zacuto... playing with Zacuto stuff in the flesh shows why it costs so much... it really is well built.
There was a hell of a lot of LED lights on display all over the place. LightPanels were in use on lots of stands and it's easy to see why... they really work and there's no heat coming from them! I did think that some of the bigger LED lights looked awfully blue though... i guess it's just in comparison to tungsten, but it all looked a bit cold to me.
Lots of stands were using new gear (from other manufacturers) to lure the punters in. There was untold numbers of Canon DSLRs mounted in lovely rigs... but generally they were there to show off matteboxes, rails, lights, tripods or something related. There was also quite a lot of RED 1's around.  What did strike me though was the amount of interest in the DSLRs compared to the bigger cams that were on display. The Arri stand with it's new digital cams and traditional 35mm cams were pretty quite whenever i walked past...
I got a chance to sit in on some seminars. First, i went to the 'Production Show's' Production Theatre for the 'DoP's guide to choosing the right camera for your film'. It was run by two DoP's...one of which was French, the other was an American. They took questions from the audience and talked about the issues of shooting on RED, DSLR and also film. It was a bit 'all over the place' but i picked up some interesting tips. Both of the DoPs in question had shot with the 5D mk2 and both loved it.
Next i went to the DSLR workshop with the F-Stop Academy's Drew Gardener and Den Lennie. This was the one Phil Bloom was supposed to do before he got the call to go back to Skywalker ranch...bless him, he even sent a video apology to the crowd. Anyway, we saw some of their DSLR work and got a good talk on how similar DSLR video work is to still photography...and although i didn't learn too much, it was a good seminar and it was very very popular...standing room only. 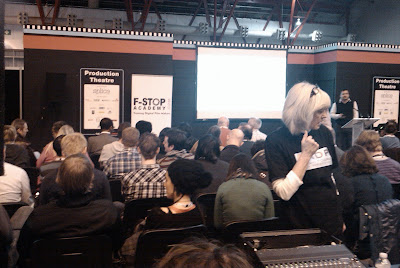 So, all in all an interesting first BVE. There was a definite air of there being a few too many people not happy about the arrival of DSLRs...mainly the big camera manufacturers and also some film-makers. I overheard a BBC guy telling his colleagues that DSLRs were a joke and they'd never use them at the BBC...   I can't help thinking he'll eat his words sooner or later.
Posted by Sean J Vincent at 6:12 PM