January is usually a slow start... frustrating slow in my view. But, not this year.  After getting New Year out of the way, i've not stopped. We had to crack right on with the shoot for the 'Their Law' trailer and also shooting the footage for my short for Cannes at the same time. Both are looking fantastic, even if i do say so myself and i'm really pleased with how it's all going.

Check Out the production blog here.
As if all the shooting wasn't enough, i'm also editing a concert DVD for Howard Jones. Yes, Howard Jones the multi-talented artist best known for his 80s hits like 'Like to Get To Know You Well', 'What Is Love?' and 'New Song'.  I'm Howard's live sound engineer, so he knows i'm into my filming and editing on the side, so he asked me to edit the DVD of his IndigO2 show which was shot on the 6th November last year. It's a huge job... 9 cameras and a right mixed bag of formats including... XDCam, XDCamEX, AVCHD, Go Pro HD MP4, Canon H2.64 and more...  It took a solid week of transcoding it all into a format i could edit with. Usually i work with Apple's Pro Res, but seeing as so much of it was XDCam already, i went with that.  The biggest pain was the Go Pro footage. It took 16 hours of StreamClip batch-converting to get it all into XDCam format....very very boring.

Anyway, the edit is coming together nicely now and i'm really pleased with how it looks. The EX3 footage looks a little more red than the XF305 and XDCam footage, but it's working well with a little colour correction.  Another couple of weeks work i reckon to get it all how i want it.

Over the next couple of weeks (in-between the Howard Jones edit sessions) i will be starting to put the 'Their Law' trailer together. We've got pretty much all of the footage now, although i think i might take a trip into London with my Camera to get some B-Roll stuff to give it more of a London flavour.  That's a big bonus with DSLR shooting...i can get on a train, wander around central London and get some great footage, and most people just think i'm taking stills.... so i get left alone. It should be quite a nice day, shoot some footage, have a pint, shoot some more footage, have another pint....train home. Easy. 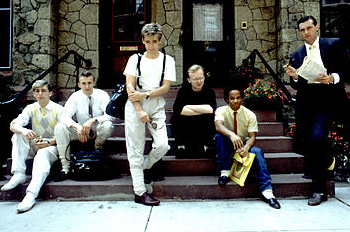 In other news... Haircut 100 have asked me to do the FOH mix for them at their IndigO2 gig on the 28th Jan. I used to love Haircut 100 when i was at junior school...i think 'Love Plus One' was one of the first singles i bought. I'm looking forward to it. It also gives me a chance to grab a bit of footage of the outside of the O2 for my Howard Jones Edit...

So, that's January shaping up.... Next month it all kicks off with the Kim Wilde European Tour, the edit, mix and finishing up of the 'Their Law' trailer and getting my Cannes films sent in.

After last year's diabolical start, 2011 is a refreshing change of pace.