If you've read my blog for a while, you'll know that i've dipped in and out of FCPX since it's release...with varying results.

Back in 2011, i started editing 'The Addicted' with it, but 5 hours into the start of the edit, FCPX crashed and lost all my work. I didn't look at it again for a few months.  I've always kept it on my editing machine and now and again i have used it for specific little jobs little titles or sometimes just for transcoding footage.. but with the 10.0.6 update (now 10.0.7) and with Magic Bullet Looks now running on it, i decided to give it another proper go.

A few things have changed since i last tried it... the import window is better and there isn't a separate one for camera import now (not that i use it)... and a lot of the menus have moved about. Another change i like a lot is the share menu... it's much better and works really well. I'm also a big fan of the time saving features...mainly:

After only 2 projects i can now zip around FCPX and edit far quicker than i could after 5 years on the old Final Cut Pro. There's some new shortcuts to learn and new ways of working, but it really doesn't take long at all. 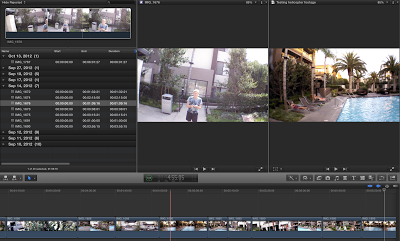 The new dual viewer is really useful... i have it turned off most of the time, but for checking colour matching it's vital. I absolutely love the background rendering. I have it set to only kick in after 5 seconds of no activity. So i can edit away without stopping until i fancy a rest or until i need to think about what comes next and FCPX automatically uses that 'downtime' to render what i've done... and it renders fast. The only things that slow the render up are some 3rd party plug-ins. Magic Bullet Looks is better than ever, but it won't playback in realtime on FCPX until it's rendered... and it still takes a little while...the same goes for NEAT Noise Reduction. But...most if not all of the included 'Looks' and effects work in realtime before the render has taken place. Awesome.

Things i'd like to see. (unless there is a way to do them already...please let me know)

I don't have the problems some people have reported about file management. I have moved projects from one drive to another with no problem.. as long as you stick to the file structure and keep things in the right folders on the root of your drives, it's no problem. The 'Duplicate Project' feature works fine too.

Things that really help with using FCPX as opposed to FCP7:

So there it is... it's not the crock we all thought it was a year ago... it's matured and continues to do so. It's still got a few issues, but i'm going to stick with it and learn it inside out...  i've still got FCP7 if i need it.

Oh, and it did crash once in the middle of a pretty big edit... but it re-booted fine exactly where i left off... so i can deal with that. 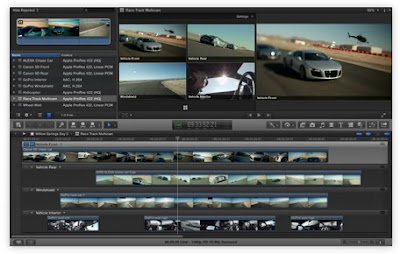 I did an all day shoot last week on a 5D Mk2. It's been a while, but it was interesting to go back to doing a proper shoot on a DSLR. I had some gorgeous lenses...all Canon 'L' range zooms... apart from a Zeiss compact prime 50mm. It all worked great... but i really missed the stuff i've got used to on my FS100 and Ninja2 combination...namely:

Having said all that, the 5D Mk2 performed as it should and it was nice to be so compact for the day. 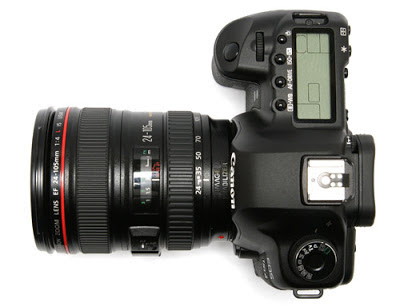