Premiere of 'The Addicted'

On the 25th November, we held the premiere of our latest feature, 'The Addicted'. After 16 months, it's finally finished.

I've already been through the greif we endured to get the DCP made in a previous post, but the day of the premiere wasn't exactly without drama either.

I'd just flown back from Copenhagen and hadn't seen the final DCP QC test... i'd left that to Jenny. Both Jenny and the guys at SDC were happy that the final file was perfect. I got to the cinema in Letchworth an hour and a half before the screening time to check it and set up a few things..  This was made slightly harder by the crew from Simon Pegg's 'The World's End' being all over Letchworth town centre rigging lights and props for the following day's shoot. They'd even turned the outside of the cinema into a pub called 'The Mermaid'... not ideal when you've got people coming miles looking for a cinema called 'The Broadway'.


Anyway, i got to the cinema and went into the big screen one room...the film was already being tested... i stood and stared in terror. The audio was over a second out of sync with the picture. I went to get the manager, Jason. He didn't understand why that would happen.. the screen had been showing SkyFall all day and had been fine. We put some trailers on...they were spot on...perfect sync. Then we put 'The Addicted' back on.... out of sync again.  At this stage i was worried. I phoned SDC's helpline. They'd never had an issue with a client's audio being out of sync. They said it was the exact same file that was Quality Controlled yesterday...not a copy. It had to be ok. They suggested the cinema's Dolby Surround System had to be at fault.

I spoke to Jason (the manager) and he said any audio adjustments had to be done over the internet by the people who installed the system. He gave them a call.... straight to answerphone.

I spoke to Jason and explained my day job as a sound engineer. I assured him that if he let me have a play with the Dolby controller set-up i would definitely not break it. He said ok.

I found the page where you program in the delay for the audio. It was calculated in Perfs (perforations) and was set at 48. I dialed it up to 72 and tried again...it was better. Then i pushed it up to 85...not so good...  there was a lot of running backwards and forwards from the projection room to the cinema as i dialled the perfect amount of delay in. Then i noticed something within the menu of the Dolby system... there were presets for 7.1, 5.1 and stereo.... it had been set on 5.1. 'The Addicted' is in stereo. I put the stereo preset on and tried again... it was the closest it's looked.... 99% there.

I told Jason and we tried putting on some of the 'Virgin Media Shorts' that he had been screening as these were also in Stereo. There delay was also there when it was set to 5.1.... Phew... that meant our file was ok and it was the dolby preset screwing things up. I put it back into stereo and things were back in sync. I explained this to Jason and he was happy to let us proceed. Bless him, he even helped us set up our stuff while i was fiddling with the Dolby stuff.


Annnyway.... after much stress and sweat, at 8.15pm people started arriving and at 9pm.. we started the film.

Watching it with an audience is pretty cool.... i was proud of our work and very happy with both the colour grade and the audio mix. It looked and sounded great. People covered their eyes in the scary bits and lots of people jumped at the right times too. The cheer during the end credits makes the endless sleepless nights not seem so bad.

It was great that so many people came and we're really grateful to those that came such a long way. 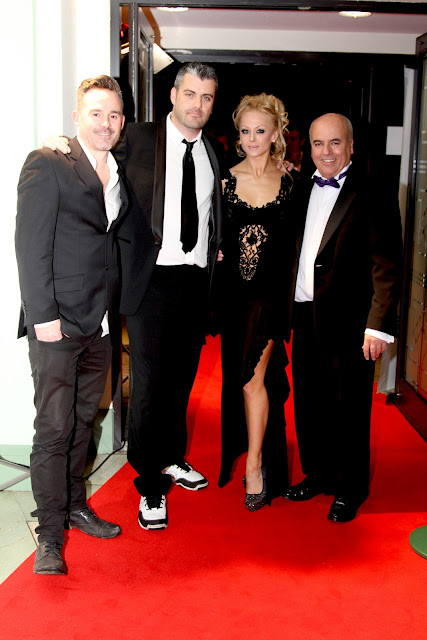 Finally, i'd like to say a huge thank you to Jason and the team at The Broadway Cinema for making such a big effort to help the evening go to plan and also to Lawrie, our Exec for supporting this project right through all the ups and downs.  Distribution is the next hurdle, but with plenty of offers already on the table, we should have some news soon.