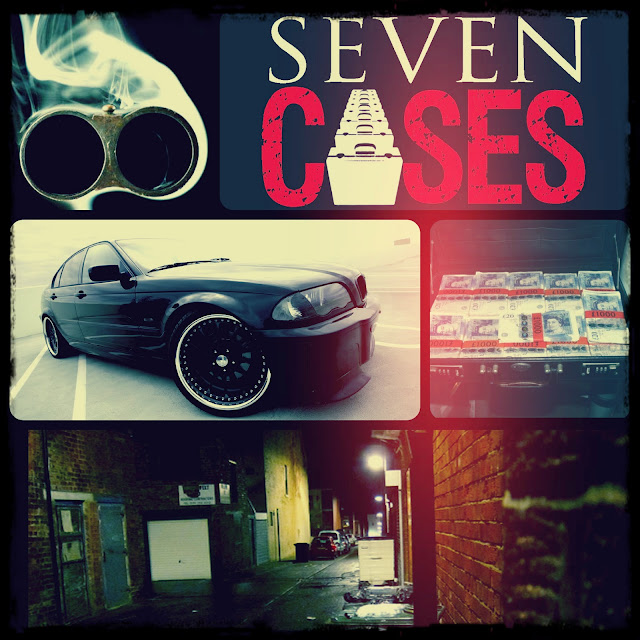 After completing and finding distribution for 'The Addicted', it's time to start production on my next feature film.  'Seven Cases' is a genre mash-up between Horror and Gangster, but with a really emotional core. It's the story of two retired bank robbers who come out of retirement for one last score before they head off into the sunset. Unfortunately, a previous victim of theirs has decided to make their final job absolute hell for them... They have to play a twisted game in order to get their money back and it takes them to the very limits of their humanity.  It's a tale of choosing money over a life and then trying to live with yourself.

I've been working on pre-production for a few months now and i've got the specialFX guys working on some of the more elaborate 'contraptions' i need.

We're currently hunting for locations and casting the last few parts. With regard to casting, i can't say much at the moment as we're still talking to people, but i'm hoping we'll have a household name movie star in a major role. Trying to sell a movie without a big name is hard...really hard and it's worth the cost to get a cinema legend involved.

Technically, we're not re-writing the book. I'll be shooting on the Sony FS100 and the Atomos Ninja2 and i'll also be doing lots of Go Pro Hero3 and DSLR shots... there's a lot of action in this movie and small, crash-type cams are going to feature heavily. Why not 4k? Why not raw? 'The Addicted' was shot 1080p ProRes HQ and it looks amazing on the big screen. We up-rezzed it to 2k and the distributors all thought it looked fantastic. I have a very efficient workflow up and running and it's really quick...and making movies at this end of the budget scale is all about working fast. I don't have the extra time or money required to shoot 4k or raw and at this stage it's just not necessary at all.  Good luck to all those new raw converts, but on a 100minute feature it's just a huge jump in terms of data, workload and money.

There's a lot of car interiors and after much deliberation we've decided to shoot these in a studio using the process technique. In other words, shooting plates first and then back projecting them onto a huge screen which will be behind the car. The car itself will be in a tunnel made of a heavy black material and surrounded by a moving light rig to simulate passing cars and brake lights. It will give us the flexibility to move the camera on both a dolly and a jib while shooting car interiors - impossible on a trailer or on the road.

As well as the interior shots, we'll also be shooting some amazing driving footage out on a road. We've been doing tests on this for a few months now and we're confident we've got some great ideas for a unique looking perspective.

Major differences in production from the last feature? Probably the biggest change will be in the audio department. Last time we recorded directly into a mobile Pro Tools rig from 4 radio lav mics and 2 booms. This time we're using a very small but very high quality mixer to give us 4 balanced XLR inputs into the Ninja2. The Ninja2 can record 4 discrete audio channels so we don't need to worry about syncing in post - which took a long time on 'The Addicted'. We've also decided to use just boom mics this time. The radio lav mics were great for the type of film i made last time, but this is a much more controlled film with a lot less working 'on the fly', so i can control the set a lot more rigidly and allow for optimal boom placement from my Production Sound guy, Jon Atkinson.

On 'The Addicted', i made regular video blogs as we were in production, but this time i'm going to do things differently. There will be the odd video blog, but most of the documenting of the production will be kept for use later. This film relies on the audience not knowing too much in advance so too much coverage will spoil the surprise. However, we're aiming for a fast turnaround on this film and we hope to have it ready for Sundance 2014.... so there's not too long to wait to see what we're up to.